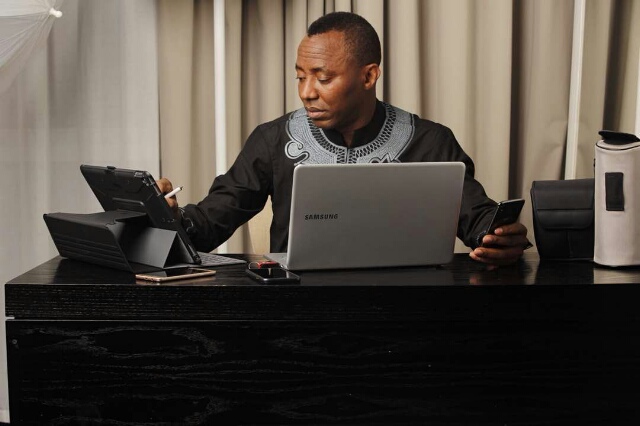 Presidential aspirant, Omoyele Sowore has rejected the PACT result after Fela Durotoye emerged as consensus candidate.
According to the Sowore’s campaign organization, the party never participated in the straw poll.

Durotoye who was part of PACT (Presidential Aspirants Coming Together), emerged as the consensus candidate at the party’s meeting on Thursday, beating the likes of former Central Bank of Nigeria (CBN) Deputy Governor Kingsley Moghalu and Omoyele Sowore, publisher of Sahara Reporters.

Sowore who should by virtue of the result withdraw his candidacy and support Durotoye said in a statement that he was not part of the selection process.

“On Thursday, the Presidential Aspirants Coming Together (PACT) selected a Consensus Candidate from amongst the aspirants who participated in the straw poll. The TakeItBack Movement and our convener, Omoyele Sowore, were not part of this action,” the statement read.

In the statement signed by Dr Malcolm Fabiyi, the Director General Sowore2019 Campaign, it said: “Our position at the TakeItBack Movement has always been that a United Front of progressive forces is essential for wresting power from the status quo politicians. We believe that our voices are stronger together. As we’ve stated previously, the successful cooperative struggle which several youth presidential aspirants participated in, to extend the voter registration exercise, clearly demonstrates the power of a United Front.

“However, we have also been very clear in our position, that the choice of who becomes the leader of almost 200 million Nigerians should not be determined by only about a dozen people, in a nation of 180 million persons. As democrats and progressives, we believe that leaders should emerge, only through a transparent process that allows the millions of Nigerians that are yearning for national development and transformative leadership, to have their say in electing their own representatives, in free and fair party primaries and eventually at the national polls in February 2019.

“Our unwavering commitment is to a fair and transparent democratic process that includes party primaries and coalition building. As all the political parties stage their legislative, gubernatorial and presidential primaries between now and October 7th, 2018, we enjoin all Nigerians who desire national transformation to participate actively in the political process by joining political parties or competing for elective positions.

“For those seeking a political platform that stands solidly with the Nigerian people and is not aligned with either of the twin evils – the APC and PDP – that have ravaged Nigeria for decades, we invite you to join us in the African Action Congress.

“The democratic process is about more than just the presidency; it is our aim to fill elected offices across Nigeria, from councillorship to the Presidency, with young men and women who are tired of the status quo and are truly primed to reclaim Nigeria.

“We have heavily subsidised our nomination form fees to give brilliant and progressive minds across the country a chance to make their mark on Nigeria. Our complete fee exemptions for the disabled, youth corpers, honourably-discharged defence personnel and serving or retired teachers, nurses and emergency service workers, prove that we are committed to building a greater Nigeria.

“The TakeItBack Movement and the African Action Congress party are committed to creating a Nigeria that works for all, not a select few. We thank all the millions of Nigerians that have supported our campaign for transformation thus far.

“The road ahead of us remains a long and arduous one. With your continuing support, we will remain steadfast in demanding a fair and equitable nation, that works for all Nigerians.

“Onward together! Let’s TakeItBack with action and determination!!”