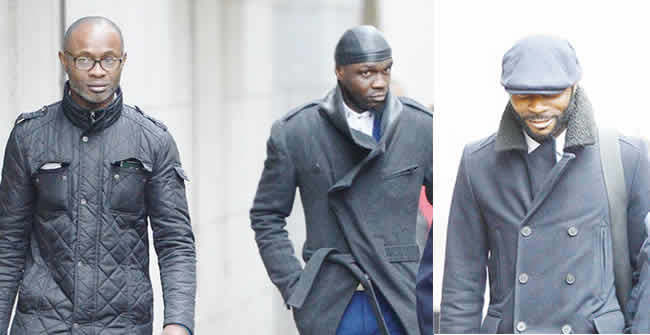 The Sodje brothers made headlines a few days ago when it became known that they were found guilty and jailed for fraud in 2017.

The brothers — Efe Sodje, 46, Stephen Sodje, 43, and Bright Sodje, 52 — were said to have siphoned off cash from their charity, Sodje Sports Foundation (SSF).

They were alleged to have pocketed money raised at black-tie dinners, auctions, and charity football matches.

The case was kept under wraps due to a clause preventing it from being publicised until the conclusion of a separate trial involving Sam, who was on Monday cleared of money laundering.

Speaking with TheCable, Sam, a former Super Eagles central defender, described the match fixing and fraud charges brought against him and his brothers as a witch-hunt.

Sam, 39, spoke about the allegations levelled against him and his brothers.

All these talks and crime they brought against my brothers are all lies. They are not really the ones they targeted but me – Sam Sodje. This is the highest witch hunt ever. It is all cooked up because the journalist that set me up on the match fixing/money laundering scandal was jailed for fake news. The one we called ‘fake sheikh’. Mazher Mahmoud is a well known journalist always setting up top people. He has been in this business for over 30 years. If it was true, why is it that it was the journalist that went to prison and not me?

On the part played by Bright Sodje

The £60,000 they claimed the Sodjes embezzled, Bright alone is worth 10 times more of that. He has a house in Tunisia, Morocco and Spain. Why will he go and do that kind of fraud? Bright is not like me. He is typical English. A proper English man and he is a magistrate. Can you imagine that? A magistrate. It is because they could not believe that Mahmoud will go to prison for lying and peddling fake news.

If you say the foundation is a fraud, arrest everybody… but who are the first set of people to be arrested? Is it not the board of trustees/directors? And the accountant?

The question to ask is why is it that Betts and Carson that were part of board of directors was not included in the trial of the foundation’s fraud charges? Why just Bright alone? After all, three of them were the signatories to every cheque?

Why Sam was not convicted

I’ll tell you that it’s ‘operation bring the Sodjes down’ that’s going on in England. Let’s say the fraud issue is really correct, everyone is suppose to be in prison by now. It is lies.

The match fixing allegation didn’t go well as they expected that’s why they came up with the fraud thing with my brothers involved. I was also included in the fraud thing concerning the Sodje foundation. When I won that, they now brought money laundering charges against me again. It was not even my case but some other people.

The Sodjes hobnob with the MPs and most of our meetings were held in the parliament. For a black man to be doing that, we’ve gone too far and they don’t like that. You see me and my family, we don’t care about what they are saying in the media. You see, assuming we are not British, they would have told us to go back home. But because they can’t do that, they are left with tarnishing the Sodje name.

‘All Nigerians are fraudsters’

I know how this country works. The only thing they can do is scandalise the Sodje family name. They can’t do us anything. In court, they were telling me to my face that all Nigerians are fraudsters. Majority of the people here in prison for rape are all whites. How can you take a professional footballer to court for £300? As at 2013, I was worth £1.2 million. How can I go and do money laundering for people I don’t even know for £300? Does that make sense? My mobile phone bill then alone was £550. How come they came up with that publication when I won my case on Monday that my brothers were jailed?

Are the Sodje brothers in jail?

How can they be in jail when we just returned from Nigeria? We all just came back from Nigeria from burying our mother. My brothers never went to prison for one day. When the jail terms were read out in court, they appealed it and that’s what’s going on right now. They never were in prison.

On Akpo Sodje being on the run

Akpo is on social media, he phones them everyday. And he has a very good job in Delta state. His address is on his social media pages. How can someone on the run do that?

‘We are fighting the system’

And guess who we are fighting again? It’s the British media. And all these is because of the journalist that is jailed for giving fake news in the case. Just because I won the case on Monday and they were ordered to pay my expenses for the duration of the court case, the next thing, the media went crazy.

There’s so much to this case that the world out there doesn’t know. Can you imagine how many copies of papers Sun UK sold that morning that the scandal broke with my pictures on their front page? I’ll tell you, they sold 1.7 million copies just within two hours.

Look at what they did to Sam Allardyce? They always set up people while claiming to investigate a none existing allegation. They could not even bring any indicting document to support their case against me in court. I have never even bet in my life before. How can a judge say every Nigerian is a fraudster? He has no right to say that.

The bone of contention against the Sodjes is that we are fighting the system back. As the case was going on, I went ahead to buy a 350 Benz SUV hero and that got them infuriated the more. Saying I was not suppose to buy the car as the case was ongoing in court. That my account should be frozen.

US kicks over Onnoghen’s suspension

ONNOGHEN’S SACK AS CJN: I AM VINDICATED – Joe Igbokwe