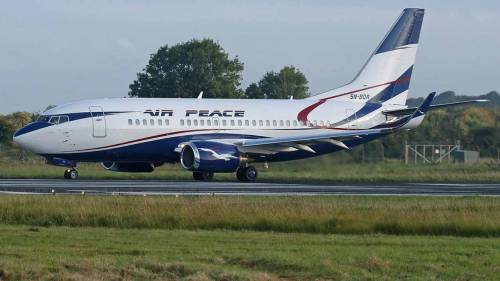 A security scare occurred at the Murtala Muhammed Airport (MMA) in Lagos on Thursday night as burglars attacked Air Peace aircraft at the airport while it was taxiing to take off to Abuja.

The aircraft, a Boeing 737 was attacked at 7:35 pm by unknown bandits on the domestic runway of the airport.

A source close to the scene told our correspondent that suspected burglars opened cargo hold of Air Peace Flight 7138 taxiing for departure on Runway 18R (A1) of the Lagos Airport.

The Communications Manager, Air Peace, Mr. Chris Iwarah confirmed the incident and a passenger aboard the aircraft also tweeted about the incident.

The forced opening of the cargo of the aircraft led to delay in the departure of the aircraft for close to 2hours as security operatives attached to the airport carried out a comprehensive search on the airplane before being allowed to depart the airport.

Corporate Communications Manager of Air Peace, Iwarah said: “We are sincerely grateful to all our wonderful guests on board Flight 7138 for their support, patience and cooperation throughout the precautionary security checks conducted by Explosive Ordinance Disposal (EOD) squad, Federal Airport Authority of Nigeria (FAAN) Aviation Security (AVSEC) and our security team after suspected thieves opened the cargo hold of our aircraft holding for departure on Runway 18R (A1) of the Murtala Muhammed Airport, Lagos at about 7.35pm on Thursday, February 08, 2018.

“Pilot-in-Command, Capt. Adesola Arasi had to contact control tower when he was alerted by the light that came on in the cockpit suggesting that the cargo hold was opened for about 15 seconds and immediately shut.

“Our guests, who were fully briefed of the development by the pilot-in-command, were advised to disembark from the aircraft and board an Air Peace bus while the joint security operation by EOD, FAAN AVSEC and our security team lasted. The Lagos-Abuja flight was cleared by the security experts after an exhaustive screening of the aircraft lasting about 30 minutes.

“The flight eventually took off at 9.30pm and safely landed in Abuja at about 10.23pm. Our satisfied guests commended the professionalism of Capt. Arasi and his team as well as the high safety standards of Air Peace.”

Iwarah assured that the airline would continue to take all necessary measures to ensure the safety of its guests, crew and equipment.

He recalled that such incident was not the time it would be happening at the runway as there was a recent incident involving a private jet where luggage belonging to a Nigerian musician was alleged to be stolen by the airport runway thieves as the private jet was taxiing at the tarmac after landing.

Saharareporters revealed two incidents involving private jets at the airport in December 2017. One was an attack on a private jet arriving Nigeria from Turkey leading to the theft of a bag belonging to a flight attendant, and a second incident involved two popular Nigerian musicians, Tiwa Savage and Wizkid while arriving from a musical show in held in Uyo, Akwa Ibom state.