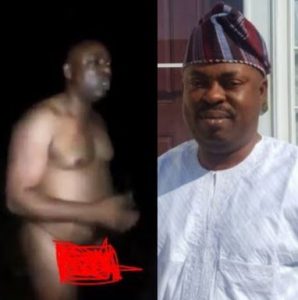 Hon. Tiimothy Owoeye, the Osun State lawmaker seen on a viral video bathing in the market square allegedly with human blood for ritual, has been described as a victim of a fraudulent syndicate operating in the southwest state for some years now.

According to the outcome of Police investigation into the video, which went viral over the weekend, Owoeye, who is the Majority Leader of the Assembly, fell into the trap of some fake herbalists about six months ago while searching for spiritual help to solve some personal challenges.

In the said video, the lawmaker was being beaten and harassed by some people who claimed to have caught him bathing naked in the open market at midnight.

Findings by CityScenes revealed that he currently represents Ilesa West on the platform of the ruling All Progressives Congress (APC), and is seeking to be reelected into the same position in 2019 before he fell into the den of blackmailers who have ripped him off of millions of naira as he struggled to save his political career and his name. Speaking on the issue in Osogbo, Osun police commissioner, Adeoye Fimihan, said Owoeye is not the only victim of the arrested suspects.

“The lawmaker is actually a victim of some fraudsters who duped him some amount of money. Our investigations revealed that he was tricked to the market that midnight to blackmail him and also prevent him from raising any alarm in future. He fell for their plans and that video was made to disgrace him if he ever go public with his ordeals in their hands.

“We found out from the victim and the suspects we have arrested that this whole thing started about six months ago when the lawmaker agreed to have a midnight ritual bath in a market as part of what his herbalists said he must do to surmount his problems. The video was shot at a location in Osun Jela, a sleepy community between Osogbo, the state capital, and Ilesa.

” Immediately he undressed himself and started bathing, some persons, already waiting for him as planned by the same herbalists who sent him there, emerged and started beating him as they record him on video using touch light and phone lights.

He has paid over N40m already before the video was released after the fraudsters found out he has already involved the police. To raise more cash being demanded by the criminals in order to keep his secret safe, he was on the verge of selling his Pete Station. We moved in swiftly and arrested some of the ringleaders.’