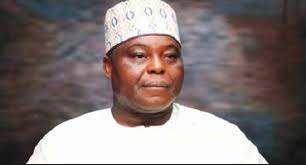 Peoples Democratic Party (PDP) chieftain Raymond Dokpesi’s United States (U.S.)visa has ben revoked because his name is on the looters list released by the Federal Government, the media mogul has said.
He has sued Minister of Information and Culture Alhaji Lai Mohammed, who announced the list, seeking payment of N5billion damages.

No date has been fixed for hearing the suit filed on Monday before the High Court of the Federal Capital Territory.

He is seeking N5billion damages for alleged defamation of character.

Dokpesi said the defendants allegedly sent his name as a looter to the United States Embassy, which in turn notified him on March 16 that his visa had been revoked.

The US Embassy, he said, told him it was because his name was among a looters list submitted to it by the Federal Government.

The plaintiff said the publication of his name as a looter was malicious since he has not been convicted by any court of competent jurisdiction.

Dokpesi prayed that the retraction and apology to him be published both in the social media and in newspaper and televisions stations.

He is also praying for an order compelling the defendants, including Attorney-General of the Federation Abubakar Malami (SAN), to publish a full retraction of the defamatory publications and to apologise to him.

In the suit by his lawyer Chief Mike Ozekhome (SAN), Dokpesi is also praying for a perpetual injunction restraining the defendants or their agents from further making any defamatory publications against him, and N50million as cost of the action.

The publications, he said, have prejudiced his constitutionally guaranteed rights to presumption of innocence until proven guilty, and that his right to fair hearing as enshrined in the Constitution has been blatantly violated.

“The defendants’ defamatory publications are malicious and calculated to overreach and prejudice my fair trial and for purposes of stampeding and cowing the court to convict me at all cost by agreeing with the defendants’ skewed position,” the plaintiff said.

Dokpesi said on March 30, the defendants allegedly defamed him by publishing his name as treasury looter in a news conference on the basis that he is on trial for allegedly receiving N2.2billion from the office of the National Security Adviser (ONSA).