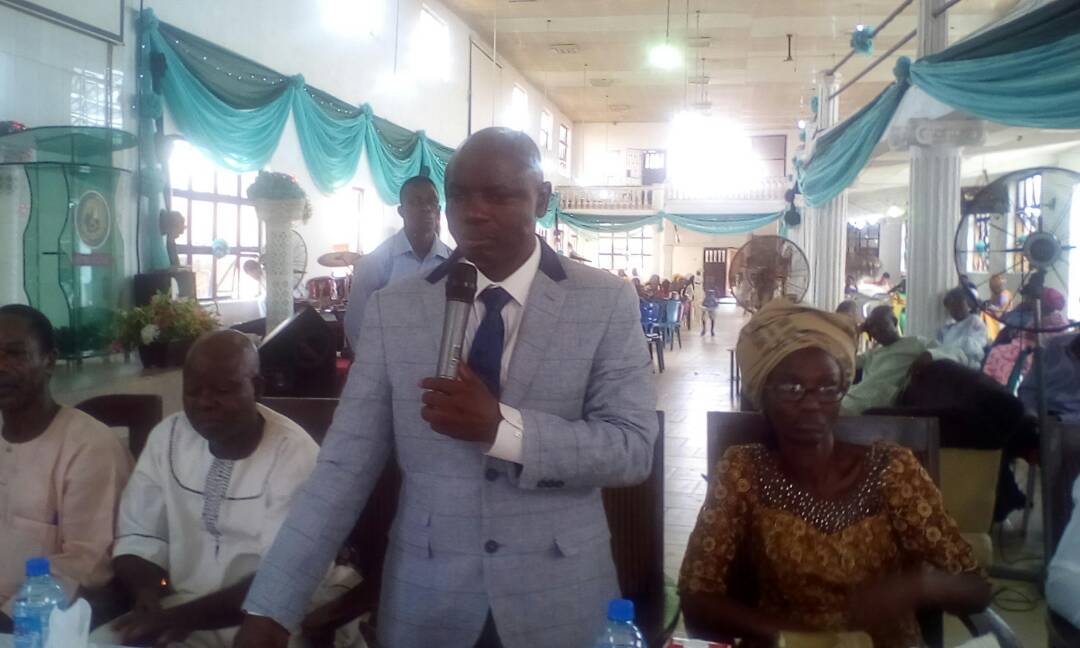 President Muhammadu Buhari of  Nigeria has been urged to beam his searchlight on corruption on the civil service, the military and paramilitary.

This is coming on the heels of the general apprehension of the populace over the anti-corruption war of the All Progressives Congress (APC)-led Federal Government.

Addressing journalists to herald the 16th Annual Convention of Pentecostal Sanctuary Bible Ministries, Odo Egbo, Ijebu-Ode, Ogun State on Sunday 11th March, 2018, the President of the Ministry, Prophet Sunday Dare Iyunade stated that more needed to be done by the Federal Government to nip corruption in the bud in the country.

Iyunade berated the Federal Government, for according to him, failing to fulfill it’s promises to  Nigerians, wondering why there is still poverty in the land in spite of the increase in Internally Generated Revenue (IGR), increase in external reserve amongst others.

He added that the money collected by the Federal Government from alleged looters of the nation’s resources ought to have been used to improve the her economy.

“There will be conflict amongst them until they leave as all their marriages will collapse. Voting will not determine the next president unless Nigerians pray. Nigerians must pray for God to show them the way out as they are not ready to leave,” he said.

The man of God, who predicted the annulment of June 12, 1993 presidential election, deaths of General Sanni Abacha, Chief M.K.O Abiola, the defeat of former president Goodluck Jonathan amongst others, revealed that the South West’s economy will degenerate further and advised the Yorubas to pray so that they would not be disgraced.

While Lamenting the hardship and poverty in Nigeria occasioned by economic recession, Prophet Iyunade wondered why the Northern part of the country ‘remains very poor despite the fact that they have more states than other regions and for their huge representation in both the Senate and the Federal House of Representatives.’

He said: “have you not wondered why the northerners remain so poor despite the fact they have more senators, more members of the House of Representatives, more political and military appointees.

“It is we missionaries that can tell you what is happening in the north. There is much poverty there despite all the federal allocations they get. If you are careless with your food in the canteen there someone is waiting at the corner to pick it up, that tells you how poor they are.”

On the involvement of Christians in politics, Iyunade said that though it is good for Christians to be politically active, they might not be able to cope with the way politics is being practised in Nigeria.

According to him, as a politician in  Nigeria, you must be ready to lie to the people, deceive them and sometimes kill people to get to public offices, adding that all these are against the ethics of Christianity.

He warned that some evil forces were influencing celebrities to rise against the doctrine of the church such as tithes and finances.

“it is a plan to cripple the church’s finances, which God is fully against. They are like severed trees, whose leaves shall eventually wither and fall off. They shall be no more,” he enthused.

The cleric berated those criticising churches for establishing universities, saying that churches came to the rescue since, according to him, the government could not cope with the demands of providing quality university education.

Iyunade stressed that most private universities have not started making profits as he said that they spend huge amount of money to pay lecturers and provide facilities on a regular basis as required by the National University Commission (NUC).

The prophet used the occasion to commend the women folk for moving closer to God than men, who he accused of being too proud to draw close to God.

He accused the men of transferring their responsibilities to women, which he said was why women go to God for refuge all the time.

“Women are the last children of God, so they tend to be closer to him. They are always under authority from their husbands and children, so they have no choice than to cry to God for help, which is why they are always many in the Church,” he stated.