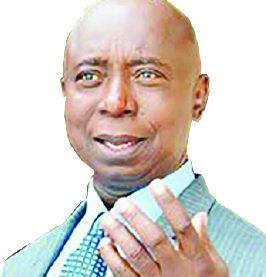 When the military midwifed the current civilian dispensation in 1999, Prince Ned Nwoko, a Nigerian-born but United kingdom- based maritime and human rights lawyer was amongst the top rank of the Nigerians who won elections to sit at the National Assembly.

Nwoko blazed the trail because amongst the ranking human rights campaigners who fought for the emergence of democracy, after over four decades of military interegnum, he was one of the few who decided to take the bull by the horn by venturing into the arena of partisan politics. But at the back of his mind was to render selfless service to his fatherland and his people and not for money making. He gave his all to win the coveted position to sit amongst the national legislators to build the democratic institutions that would become legendary in bringing about prosperity to the people.

Ned Nwoko’s political trajectories can be likened to a beautifully packaged journey whose destination has a very liberating and an inspirational mindset.

He was amongst the Nigerian legal minds who helped shaped global narratives during the Military regimes that won some mileages for the country to an extent that the then military ruler General Sani Abacha was persuaded by superior logic to set up the National human rights commission to be in conformity with the Paris principle and indeed best global practices.

During those periods when the country faced sanctions for failing to embrace democracy, Prince Ned Nwoko who was doing very well as a legal practioner in Great Britain, volunteered to speak for the international interest of corporate Nigeria. He did virtually on pro bono basis because of his love for fatherland.

By the way he is of the royal lineage.
This formidable backgrounds may have formed the basis for his positive and indeed impressive performance as a legislator representing his immediate constituency of Delta State at the national legislature as a member of the Federal House of Representatives.

He has a monumental legislative record for the National Assembly before returning to his first love which is international practice.

But once more many years after he gloriously left the political terrain, Nigeria has now for the umpteenth time gained a lot from his astuteness in such a way that he played pivotal role in negotiating for the payments to Nigeria by Paris club of the debts refund which invariably has financially stabilized Nigeria to a substantial level.

We are speaking about billions of United States Dollars. For this humongous amounts to be brought into our economy that was at its lowest performance index, is to put it mildly liberating.

That Nigeria has been in economic meltdown is a notorious fact.

Indeed in the last two years, Nigeria’s economy has snowballed into recession but the recently won refund from this global lending institution (Paris Club) seems to have provided the magic wand which has enabled most States of the federation that almost collapsed financially to regain some lifeline and regain some capacity to meet up some basic financial obligations such as payments of salaries/pensions.

Nigeria as a notorious reality slipped into recession, with the latest growth figures showing the economy contracted 2.06% between April and June.

The country has now seen two consecutive quarters of declining growth, the usual definition of recession. These negative indices stared us in our faces many months before this Paris Fund refund came through the ingenuity of some Nigerian officials and the expert consultancy services offered by a team led by Prince Ned Nwoko who was educated in the United Kingdom.

Its a reality that our vital oil industry has been hit by weaker global prices, according to the Nigerian Bureau of Statistics (NBS).

But reports also claims that the government says there has been strong growth in other sectors.

For instsnce, crude oil sales account for 70% of government income.

Sadly, as observed by Business analysts, the price of oil has fallen from highs of about $112 a barrel in 2014 to below $50 at the moment.

“Outside the oil industry, the figures show the fall in the Nigerian currency, the naira, has hurt the economy. It was allowed to float freely in June to help kick-start the economy, but critics argued it should have been done earlier.”

“The government, however, has found some positive news in the figures,” so says independent economic analysts.

“There was growth in the agricultural and solid minerals sectors… the areas in which the federal government has placed particular priority,” said presidential economic adviser Adeyemi Dipeolu.

Report has it that Nigeria, which vies with South Africa for the mantle of Africa’s biggest economy, is also battling an inflation rate at an 11-year high of 17.1% in July.

“A lot of Nigeria’s current predicament could have been avoided,” said Kevin Daly from Aberdeen Asset Management.

“The country is so reliant on oil precisely because its leaders haven’t diversified the economy.

“More recently, they have tried, and failed, to prop up the naira, which has had a ruinous effect on the country’s foreign exchange reserves and any reputation it might have had of being fiscally responsible.”

This economic recession comes as no surprise to millions of Nigerians. Many say they’ve never known it so tough, so says a business daily.

The slump in global oil prices has hit Nigeria hard. The government depends on oil sales for about 70% of its revenues.

“But critics say government policies made a bad situation even worse.”

The decision to delay devaluing Nigeria’s currency meant many businesses struggled to get foreign currency to pay for imports, which had a cooling effect on the entire economy.

Following enormous pressure, the government changed tack this summer, allowing the naira to float, according to observers with considerable knowledge of pur local business environment.

“That’s led to a spike in inflation, but the hope is that it will attract foreign investors. The government also says the country needs to import less: it wants to see more products made in Nigeria”, reports BBC.

Even with the few positive official lines which predicted economic growth, the fact remains that it was the huge resources paid out by the Central Bank of Nigeria to the States from the Paris funds that can be credited with bringing about some levels of financial stability and sanity in most States of the Federation some of which couldn’t pay salaries to their workers.

However, a salient point is that the consultancy roles played by Prince Ned Nwoko as the chairman of Linas International Limited provided the needed lights at the end of the economic tunnels for Nigeria.

In a recent interactive session I held with him, he narrated the following as the patriotic reason for his intervention.

Hear him: “Well, while the battle was on, we encountered series of hostility from the creditor nations. Some countries felt that we were impugning their national integrity and threatened to severe diplomatic relations with Nigeria. Some of them sent their security agents to go after us, some employed acts of blackmail and tried to compromise us”.

He continued: ” Some even went to the extent to convince the Obasanjo administration to instigate the Economic and Financial Crimes Commission (EFCC), against us, we were even arrested and after investigating us the EFCC had to apologize to us. Some officials of Federal Government who felt that we were meddling into their forte also built walls around us. It became an uphill task to obtain the required data, vital documents where we needed forensic evidence to support our work.”

“As an international legal firm we had worked for some countries in Africa specially, West Africa, The countries engaged our firm to assist them to verify the process of repayment of their foreign loans and in the process we discovered that there were unethical things that had taken place, with that as our background, we approached some state governments to act as their consultants to verify the issue of repayment of the foreign loans. We entered into legally binding agreements with some of the states and as we progressed, the other states and Local Governments became interested. For instance under what was called: “the doctrine of collective sacrifice,” the Federal Ministry of Finance deducts funds from States and Local governments at source from the Federal account”.

He spoke further: ” The implication was that some states that were not in existence when the foreign loans were contracted suddenly found themselves making repayments for loans that they did not contract. The 774 Local governments that never contracted any foreign loan were grouped into the repayment. During our investigation, we found that some of the loans were of dubious origin, the old Gongola state was listed as having contracted $100million as foreign loan from an Austrian bank to build an international hotel. But in the process of our investigation, the bank wrote to say that it had no business relation in Africa, let alone in Nigeria.”

This to us in the human rights sector is a considerable national heroic contribution from an illustrious Nigerian and a Prince from Delta North Senatorial zone.

As affirmed earlier, it is a fact that with this strategic financial lifelines, states can now pay salaries.

The Vanguard reported that governors have now been tasked to pay salaries with the Paris Fund refunds amounting to N516. 4b in the first instance.

The Federal Government paid the sum of N516.38 billion to states as refunds on over-deductions for external debt service.

If the governors make good their promises to pay the backlog of workers’ salaries, then there would be an unprecedented economic relief throughout the country in the days ahead.

The governors had at their meeting in Abuja, promised to pay the backlog of workers’ salaries from the second tranche of the refund.

The Federal Ministry of Finance, in a statement by its Director of Information, Mr. Salisu Na’Inna, in Abuja, said the payment was in line with the approval of President Muhammadu Buhari on November 21, 2016, in partial settlement of long-standing claims by state governments

There had been long-standing claims by state governments relating to over-deductions from their Federation Account allocations for external debt servicing between 1995 and 2002.

According to the ministry, the debt service deductions for which refunds have been made were in respect of the Paris Club, London Club and Multilateral debts of the FG and States.

While Nigeria reached a final agreement for debt relief with the Paris Club in October 2005, some states had already been overcharged.

It said, “The funds were released to state governments as part of the wider efforts to stimulate the economy and were specifically designed to support states in meeting salary and other obligations, thereby alleviating the challenges faced by workers.

“The releases were conditional upon a minimum of 50 percent being applied to the payment of workers’ salaries and pensions. The Federal Ministry of Finance is reviewing the impact of these releases on the level of arrears owed by state governments.

“A detailed report is being compiled for presentation to the Acting President, Professor Yemi Osinbajo, as part of the process for approval for the release of any subsequent tranches.

We bathed once a week, ate once a day, slept in the rain – Kidnapped Igbonla students shares experience