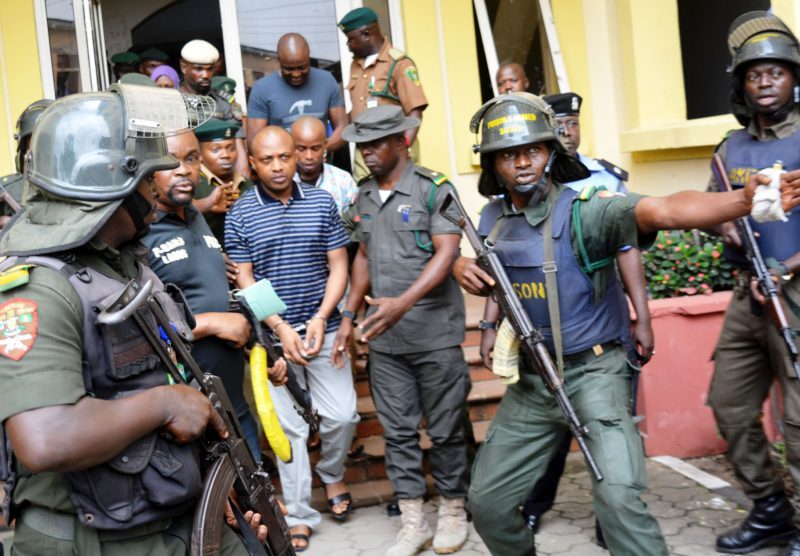 Alleged billionaire kidnapper, Chukwudumeme Onwuamadike, on Wednesday, told an Ikeja Special Offences Court in Lagos that he was coerced into signing incriminating statements by the police.

Evans, as he is popularly known, told Judge Taiwo Solebo that the police killed at least five suspects in his presence in what they called ‘the Saddam Hussein Technique’ and threatened him that a similar fate would befall him if he fails to sign the statements.

He said among the documents he signed were blank papers.

Evans and Victor Aduba are facing a four-count charge bordering on kidnapping and unlawful possession of firearms before Mrs Solebo.

While being led in evidence during a trial-within-trial which the judge ordered to ascertain the admissibility of the confessional statements obtained from the defendants, Evans said he had earlier insisted he would not sign any document presented to him by the police.

“When I refused to sign the document presented to me by Abba Kyari and co at the IGP house in Lagos, I was taken to the backyard where Idowu Haruna (a police officer) demonstrated in front of me by placing handkerchief inside the mouth of a man who had bullet wounds in his leg and was chained and handcuffed like the rest I met there.

“Sellotaped him from his neck to his head, covered him with a nylon bag and sellotaped it again, the man started shaking on the floor and then stopped. Idowu marched the wound on his legs and the man did not move. They did that to like four more persons.

“I was shaking and begging them that I will do anything they want me to do, I was taken back in and then signed documents, over 20, with some of them blank, after I stopped shaking from the experience.”

Evans also alleged that according to the date written on the particular statement being contested, he could not have written it in Lagos as he was still in Abuja.

The defendant said he was also blocked from seeing his family and a human rights lawyer, Femi Falana. He said upon discovering his presence at the SARS office in Ikeja, he was locked in the toilet with two police officers.

“After a while, I heard them greet Falana and he was told they took me out for investigations meanwhile I was in the toilet in the office.

“I heard Falana warning them that whatever I did, they should charge me to a court. He said he does not want to hear that I had been shot dead while trying to escape and they said it would not happen.

“They refused to allow my parents see me and that is why my father sued them to the Federal High Court.”

Evans also told the court that in the videos recorded at the IGP house in Lagos, the police had a board behind the cameramen with things written for him to read in case he forgot what had earlier been rehearsed.

He added that there were police officers with guns who kept reminding him he would be killed if he did not read as instructed.

A police sergeant, Julius Ekundayo, while testifying, denied the claim that the police stopped Mr Falana from seeing the first defendant as “Falana never visited their office.”

Mr Ekundayo also said he personally recorded Evans’ confessional statement, which was obtained in an open office in Lagos.

The second defendant, Mr Aduba said he was also forced to sign confessional statements after he was shown a picture of corpses of other suspects who had refused to sign statements.

“I was taken out of my cell with one Ikenna Chukwuemeka and when we got to the counter, I saw other people including police officers like Idowu Haruna and others. I was given some documents, over 20 to sign and I asked that they let me call my lawyer but was replied with a slap from Christian Ugwu.”

Mr Aduba said he and other suspects – whom he identified as Chukwuma Nwosu, Ikenna Chukwuemeka, and Soyan Paul – were taken to “the theatre” where they were beaten with machetes by Mr Haruna.

“I was returned to my cell and in the evening we were marched into a white bus and left there. I and Ikenna were later brought out and I was told if I do not sign the statements, when their boss comes in the evening, I will be killed and this is my last chance.

“I was taken to their office, I begged them to let me inform my office. Haruna brought out his phone and asked me to identify the images on them, to my surprise it was the dead body of Chukwuma and Paul so I had no option than to sign.”

The judge adjourned till January 31, 2019, the adoption of the final written address of the trial-within-trial.

Why we can’t produce Diezani in 72hrs – Magu