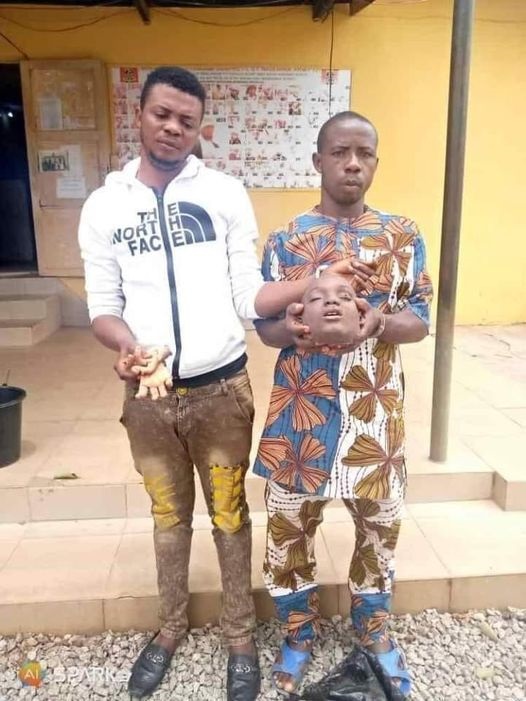 Men of  Kwara State Police Command, yesterday, arrested two middle-aged men, Wasiu Omonose, 35, of Abioye compound, Share, Ifelodun Local Council of the state and, one Akanbi Ibrahim, 32 of  Sayo Street, Share, for being in possession of a fresh human skull and two wrists.

The suspects were arrested along Oke Oyi/Jebba Road, some 30 kilometres away from Ilorin, the state capital, where they allegedly concealed the human parts, suspected to be that of an unknown female teenager inside a bag while riding on a motorbike.

The Guardian learnt that the demeanour of the two men at a checkpoint raised suspicion and they were immediately pursued and arrested.

The suspects later confessed that they were taking the body parts to an Alfa in Ilorin for money ritual purposes.
A spokesperson for the Command, Chief Superintendent of Police (CSP) Ajayi Okasanmi, who confirmed their arrest, said the investigation has continued on the matter with a view to prosecuting the suspects.

He stressed that the Police Commissioner, Tuesday Assayomo, the Police and other security agents in Kwara would ensure that the suspects and others with criminal tendencies continue to face prosecution in line with the laws of the land.

He said: “In furtherance of the efforts of Kwara State Police Command to rid the state of crimes and all criminality, eagle-eyed policemen attached to Operation Harmony, while on patrol of Oke Oyi/Jebba road at about 1130hrs yesterday, intercepted two men on a motorcycle.

“They attempted to evade the officers on stop and search duty, which action aroused the suspicion of the operatives.

“Consequently, the suspects were hotly chased and forced to a stop. In the process of searching them, a bag containing a fresh human head and hands were found in their possession.

“On interrogation, the suspected ritualists by name, Wasiu Omonose of Abioye compound, Share and, one Akanbi Ibrahim of  Sayo street Share, stated that they were taking the fresh human head and hands to an Alfa in Ilorin for ritual purposes.

“ For the umpteenth time, the commissioner of police, Tuesday Assayomo, is warning criminal elements to relocate from Kwara State, as the Police Command would not fold its arms and allow criminals of whatever nomenclature to truncate the peace and harmony presently existing in Kwara State.

“Any person or group of persons found in any manner attempting to initiate the breakdown of law and order in the state would be arrested and made to bear the full wrath of the law.

“The Commissioner of Police restated his determination to prosecute the suspected ritualists as soon as investigation into the matter is concluded.”

Kwara teachers to get tablets, smartphones as KwaraLEARN begins May 16