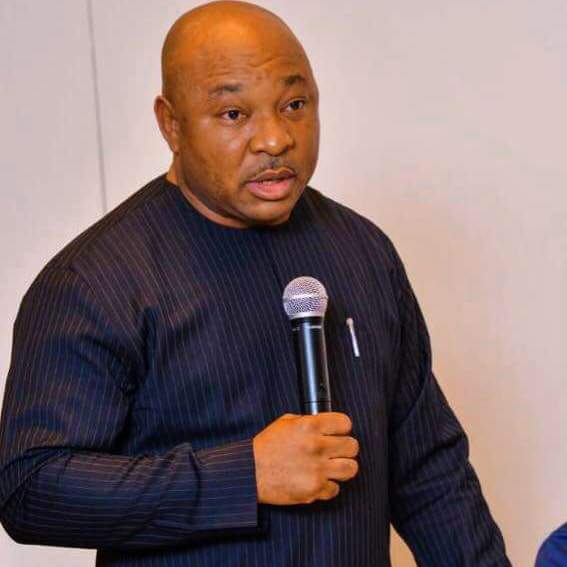 Just as the ground work for the 2019 General Elections is ongoing all over the country, some people are allegedly busy hatching plans to scuttle what God has planned to bring relieve to them through politicians that have good intentions and ideas for development purposes.

One man that has reportedly come forward to make life better for his people with his candidature in the forthcoming election is Dr. Victor Alewo Adoji, who is contesting for Kogi East Senatorial Seat under the Peoples Democratic Party (PDP).

Information reaching us revealed that some Igala sons and daughters have connived against this ‘crowd pusher to deprive him of his mandate.’

We were reliably informed that a meeting was held somewhere at Jabi in Abuja by the All Progressives Congress (APC) in Kogi State, PDP Divisional Chairman, one senatorial aspirant, and one ‘Login and Logout’ senator with the aim of “granting the senator ticket in order to cause nuisance among his supporters thereby diverting our support for the opposition candidate instead of retaining the present and leave us in another complaints for their selfish ends.”

First Weekly Magazine gathered that N200Million was allegedly given to the mandate snatcher senator to strengthen him in the race, but that he lacks foresight to know that he would not win and that they only wanted to use his ‘myopic brain.’

“N50Million was given to one PDP Divisional Chairman with a promise that they would give him more later and he shared N2M each to his cabal to seal their mouths and start their wrong practices.

“N150M was given to one female senatorial aspirant and they promised to give her more later.

“She lacks what to say during her visit to Idah and she keeps painting white black, but she left one question unanswered at the event. She just kept going from one corner to another to defame the man, who is blessed with fame,” a source said.

Events watchers in the state insisted that the APC and PDP are “conscientiously working, assiduously planning and diligently consulting to rob Victor Adoji of the senatorial mandate that seeks to enthrone a regime and a system that will thoroughly overhaul the sick and rotten political practices that has been the norm in the political landscape of Kogi East.”

They maintained that Kogi East is heading towards political precipice, adding that “this moment in the history of Kogi East requires deep reflection and introspection among the people in our politics.

According to them, Kogi East is widely renowned for greatness, but that prominence and eminence have perennially and persistently eluded the biggest black brand on earth.

However there is the belief that within this seed of decay rests the seed for the growth they have waited for over the years.

“The reason for the constant disappointment in this search and grope for the greatness that is fit for Igala nation is the overwhelming majority of pretenders claiming to be working for the gains and transformation of the political system.

“There is no doubt that there is a huge gap of the effective leadership type needed as many front liners are wolves in sheep clothing, vultures, and carrion mongers waiting on the side-line for another wrong step that will give them opportunities to sink their fangs into and economy that they have almost reduced to carcass.

“The combination of these occurrences has set up alarm bells that are ringing stridently across Kogi East.

“The people are genuinely worried that the democracy whose battle was fought and won with the sweat and blood of patriots is in retrogression instead of attaining to maturity.

“As the wrong practices are unfolding, our hope is receding for the governed.

“It’s so sympathetic that we have not learned from our past errs, we were lying prostrate in a near death experience of corruption, the cancer of arrogance and fever of indiscipline,” said some concerned residents of the area.

The residents however, advised that the upcoming primary election should be ‘devoid of sentiments and built on the bare facts on who is most suitable at this time to take the mantle of leadership.’

They said: “Only Dr. Victor Adoji has the credibility that will eventually get the mantle to lead the PDP because he has the natural flair to provide the democratic, progressive and inclusive style of leadership required to consolidate the gains of the party and also to expand the party’s reach into hitherto unreached areas in Kogi East.

“He has the strength, purpose, and foresight to lead the party, he also have the impeachable record to rely on when the question of performance quotient is raised.

“The man who fits that Senate profile and who primed, prepared and ready for this highly exalted office and whose capabilities, potentials, competence and natural aptitude matches the rigour, severity and thoroughness of this engagement is no other than the man.

“He’s the man who has the right credentials, spirit, drive and persistence to get the party triumph but why killing PDP at this point in time.

“This regrettable act should be abandoned to avoid publishing the face behind the mask in order to maintain your remaining reputation in Kogi East. If you don’t want people to know, the answer is to stop doing it. Its difficult to leave your shadow behind.”

The concerned residents made it clear that Kogi East has had enough of wasted years and that the senatorial district could not afford another four years of maladministration, adding that Dr. Victor Adoji has the wherewithal to “make things better for our people so that we can catch up with other developed parts of the country.”