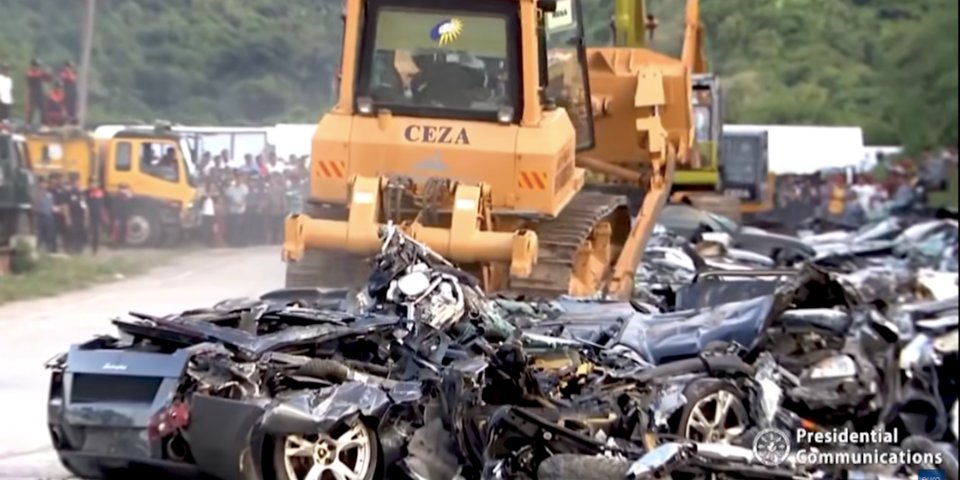 Philippines President Rodrigo Duterte has overseen the destruction of $5.6 million worth of smuggled luxury cars and motorbikes as part of his anti-corruption drive.

The 76 cars and motorbikes, which include models by Lamborghini, Porsche, and Mercedes-Benz, were publicly destroyed in a government ceremony in the northern province of Cagayan on Monday.

A Philippines government video shows at least three bulldozers crushing the vehicles, lined up in a row, to applause from a crowd. You can watch it below:

Together, the 68 cars and eight motorbikes were valued at around 298 million Philippine pesos ($5.6 million/£4.3 million), according to a press release from the Philippines government .

They had been part of the government’s seizure of 800 vehicles allegedly smuggled through Cagayan’s port, the government said, without specifying when the confiscation took place.

According to the government, Duterte told supporters at Monday’s ceremony, named “Condemnation and Public Destruction of Contraband Vehicles”: “You know, before a place can really be developed or a viable place to do business, you have to establish first law and order.”

This is Duterte’s second such purge of luxury vehicles. In March, he destroyed 30 cars — including Porsches, Mercedes, Jaguars, and Corvettes — in a similar ceremony.

The photos below show him inspecting a Mercedes-Benz and a Lamborghini on Monday before they are crushed.

Since becoming president in 2016, Duterte has waged a bloody war on drugs and crime — two main tenets of his campaign.

Over the past two years, more than 12,000 suspected drug users and dealers are estimated to have died under his watch, some 4,500 of whom were by police, according to Human Rights Watch .

Duterte has also overseen the arrest of more than 10,000 people — including women and children — for “loitering” on the streets, Al Jazeera reported in June .

He routinely accuses journalists critical of his government of reporting “fake news,” and justified the murder of journalists in his country.

“Just because you’re a journalist you are not exempted from assassination, if you’re a son of a b—h,” Duterte said in 2016 . “Freedom of expression cannot help you if you have done something wrong.”

The 73-year-old has also been criticized for his disparaging comments toward women. Last year he joked that his country’s soldiers were allowed to rape up to three women in areas where he had declared martial law.

In 2016, a video also surfaced of Duterte, then the mayor of Davao, joking at a campaign rally that he “should have been first” to rape an Australian nun who was murdered after being raped.

“I saw her face and I thought: ‘Son of a b—h. What a pity … I was mad she was raped but she was so beautiful,'” Agence France-Presse quoted him as saying . “I thought, ‘the mayor should have been first.'”