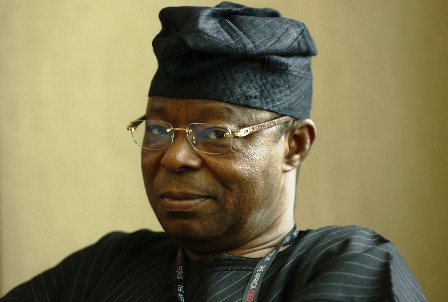 These are not the best of times for Oba Otudeko, Chairman of Honeywell Group as he appeared on Thursday, February 8th, 2018 before the Federal High Court in Lagos to testify in an alleged N5.5bn debt recovery suit between his companies and Ecobank Nigeria Limited.

Ecobank lawyer, Mr. A.O. Divine, had on Wednesday told the judge that he would be left with no other option but to apply for a bench warrant against Otudeko should the businessman fail to honour the subpoena.

After stepping into the witness box on Thursday, Otudeko said… “I’m delighted to be here, to see you all in professional practice.” He told the judge that contrary to the claim by Ecobank he was not evading appearing in court. He said he was not served with the subpoena.

His lawyer, Mr. Bode Olanipekun, told the judge that having appeared in court and adopted his statement; all was set for Thursday’s proceedings. But an attempt by Ecobank’s lawyer to quiz Otudeko was cut short by Olanipekun, who objected to his client being asked to introduce himself and state his occupation and qualifications.

“I object to that line of questioning,” Olanipekun said.

He contended that the right of Ecobank’s lawyer during examination-in-chief was limited to the adoption of Otudeko’s written statement.

But Ecobank’s lawyer, Divine, maintained that since Otudeko was in court at Ecobank’s instance, he (Divine) reserved an unfettered right to quiz him.

“The witness in question is our witness. The question I put to the witness, being an introductory question, is allowed under the law, where he lives, works, his qualifications.

“To that extent, I submit that the objection to my line of questioning is pre-emptory,” Divine said.

In a short ruling, however, Justice Idris upheld Olanipekun’s objection, and directed Divine to lead Otudeko to adopt his written statement.

The judge said Otudeko could thereafter be cross-examined by Olanipekun and re-examined by Divine. Following the ruling, Divine abandoned his tactic, saying… “We have got what we want and we do not want to lead the witness anymore. We hereby apply for his discharge.”

He resisted an attempt by Olanipekun to cross-examine Otudeko to prove that the Managing Director of Ecobank was present at a meeting where it was agreed that Otudeko’s company would pay N3.5bn out of the N5.5bn debt allegedly owed the bank as “full and final payment of the indebtedness.”

Divine maintained that “a witness whose statement was not adopted in court could not be cross-examined.”

The judge subsequently adjourned further proceedings in the matter till February 14, 2018.

Meanwhile, after the court proceedings on Thursday, Otudeko made efforts to avoid being captured on television cameras, positioned by journalists on the court premises.

Stepping out of the courtroom alongside his aides, the business mogul was confronted with a TV camera, which made him to take a detour and attempted to exit the court premises through the rear gates.

But the determined cameraman raced towards the rear gates just in time. By the time Otudeko and his entourage emerged, the cameraman was already in position.

On sighting him, the business mogul and his entourage stood at a safe distance, while some of the aides later confronted the cameraman demanding, “Why are you doing this?”

A mild scuffle was averted after one of the aides rushed at the camera in a bid to force the cameraman to stop recording the scene. Otudeko was eventually walked through the gates by his aides who formed a human shield around him and led him to his car.