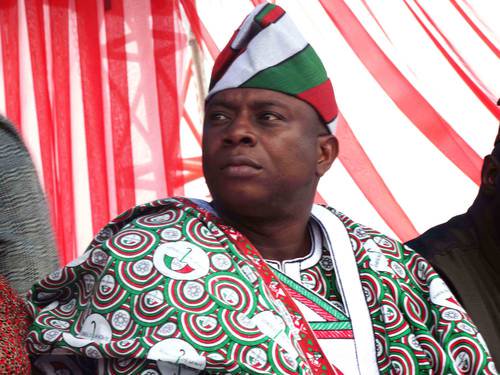 Indications have emerged that a former Chairman of the Peoples Democratic Party (PDP) in Ondo state, Ebenezer Alabi is set to return to the party after few years of dumping the PDP.

Alabi, who used to be an ally of the former National Chairman of the PDP, Ali Modu Sheriff left the party with his loyalists after the Supreme court verdict that recognised Ahmed Makarfi as the authentic chairman of the party.

After the saga, he pitched tent with the Mega Progressives Peoples Party (MPPP), which later metamorphozised into the Mega Party of Nigeria (MPN)

According to reports, arrangements have already been concluded as the ex-Ondo PDP Chairman had met with some of his political associates, friends and well wishers, on his planned move back to the PDP from MPN.

Confirming the defection of Alabi to PDP, some of his closed political associates, who preferred anonymity, revealed that barring any last minute change, the ex-Ondo PDP chairman will make his move official.

“Mr. Alabi has held lots of meetings with the leaders of the PDP in the state and they have agreed to welcome him back home because he has always been one of them and as a grassroots politician for that matter.

“So, he is already tired of the happenings in the Mega Party of Nigeria (MPN) and has concluded the plans to return to his old party, the PDP in the state with many of his supporters championing the go ahead,” the associates said.

Alabi however confirmed that he is returning to the PDP after series of pressure from his supporters to dump the Mega Party of Nigeria.

“It is very correct, I have met with the leadership of the Peoples Democratic Party (PDP) even in the state and I am on my way back to the party.

“So, I am even waiting for them [leaders of the party] now to agree on a date and make it officially known,” he said.

It would be recalled that on December 5, 2014, he resigned his position as the Ondo Chairman of the PDP, after he was pressured by former President Goodluck Jonathan to hand over the party’s structure to former governor of the state, Olusegun Mimiko, who had defected from the Labour Party prior to the 2015 general elections.

Immediately after his resignation, Mimiko offered Alabi the post of a Senior Special Assistant (SSA) in his cabinet but the latter rejected the offer, which led to a long political feud between the duo in the state.

How we felt when Ortom, Tambuwal, Ahmed dumped APC for PDP – Okorocha