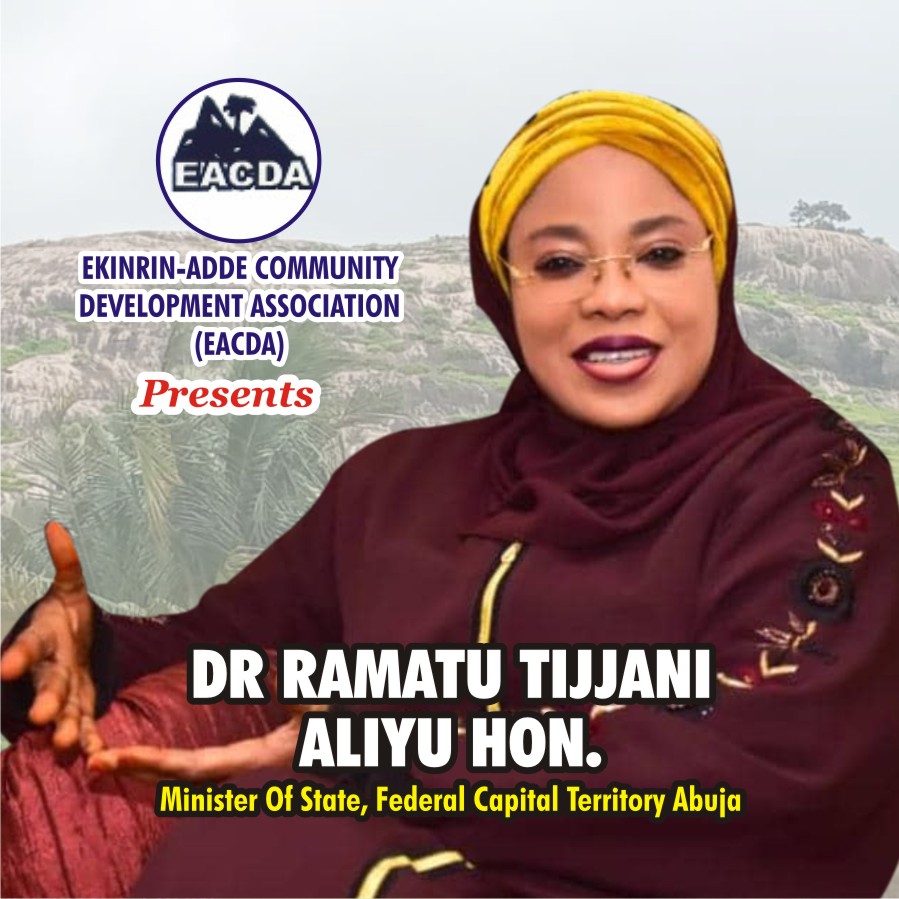 Drums will Saturday be rolled out as the Olu Adde of Ekinrin Adde, HRH Oba Anthony Bamigbaiye Idowu (Ahe Maworo 1) rests his scepter of honour on the the Honourable Minister of Federal Capital, Dr. Ramatu Tijani Aliyu.

The adorable minister is to receive the title of Yeye Bobaselu of Ekinrin Adde.

She is the daughter of late Alhaji Mamman Sidi Ali, who was the Bawan Allah of Lokoja in Kogi State.

Ramatu started her early childhood education at Dawaki Primary school Suleja in 1976 and in 1982 after she finished her primary school she enrolled for her secondary education at Federal Government College (FGC) Minna, Niger state and finished in 1988.

Two years later after a successful completion of her remedial program, Ramatu got admitted into Ahmadu Bello University, Zaria for her undergraduate program to study Urban and Regional Planning. She graduated in 1995 with Bachelor of Science degree (B.Sc) Urban and Regional Planning, after which Ramatu went to Nasarawa State University, Keffi for her Masters Degree in Public Administration. She was conferred with honorary doctorate degree in Public Administration by the Commonwealth University, London and has also earned a certificate in Leadership Skills from the Abbey College, London.

The happily married Hajia Ramatu who is a banker and philanthropist also runs an NGO she founded; the Global Women and Youth Empowerment Strategy (GLOWYES).

She first started her work life after she was mobilized to observe the compulsory national service, National Youth Service Corps (NYSC) at the Federal Ministry of Works and Housing. Young Ramatu later joint AZAH Intermediaries Nigeria Limited, a civil engineering construction firm, where she worked as Managing Director for some years, but she later went back to university where she bagged her Masters degree and Certificate in Leadership Skills and currently undergoing a PH.D program.

In 2007, she ran for political office to represent Kwali/Abaji federal constituency in the Nigeria National Assembly (NASS) but her bid was unsuccessful, a year later in 2008, she was appointed Vice National Chairman of her party, which was the major opposition political party in Nigeria at the time, All Nigeria Peoples Party(ANPP) which she served as the overseer North Central Zone.

In 2010 she was given the national women leader of the party, and concurrently served as the president of the Council of African Political Parties (CAPP) after she successful contested and won the election which took place in Khartoum, Sudan.

In 2014, after three opposition political parties in Nigeria merged into one, including her own party ANPP, she was appointed the women leader of the new party All Progressives Congress (APC), which she served until 2018.

She was assigned with a portfolio as the Minister of State for FCT by President Muhammadu Buhari in August 2019.