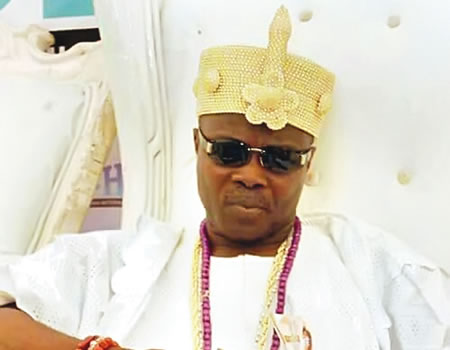 A highly respected traditional ruler in Yorubaland, the Olowu of Owu Kuta, Oba Hammed Adekunle Makama Oyelude, has called for total support for the Nigerian Army on the war against terrorism.

The Olowu was reacting to a report in the media which indicted the Nigerian Army for war crimes in countering Boko Haram and other threats to the country.

The monarch said the report, which accused the troops of war crimes was mischievous and disheartening, considering the sacrifices the soldiers have made in restoring peace back to the nation.

Oba Oyelude, while addressing a press conference on Thursday at his ancestoral Palace, implored Nigerians irrespective of political affiliation or convictions to come together and resist the cheap blackmail against our Army.

He said, “At this critical time in our nation’s history, I consider it mischievous and malicious the timing of the release of the said report, and the usual double standard of the so called Amnesty International in demoralizing our patriotic Army.

“We were thrown into mourning some weeks ago, when our soldiers were slaughtered by insurgents.

“This resulted in low morale among troops and one must acknowledge all efforts put in place by the present administration and previous ones in motivating the Army to do its job.

“I believe the only way to go is for Nigerians in rare show of patriotism to reject this assertion and keep supporting the ongoing efforts of the present government through the Army and other security agencies in protecting the integrity and sanctity of our sovereignty.

“I call on all patriotic Nigerians to rise up against the agent of Colonialism under the disguise of pseudo Human Right Organizations , because their usual numerous activities have always been injurious to our fighting force, the Nigerian Army is our national pride,
Long Live the Nigeria Army,” he added.