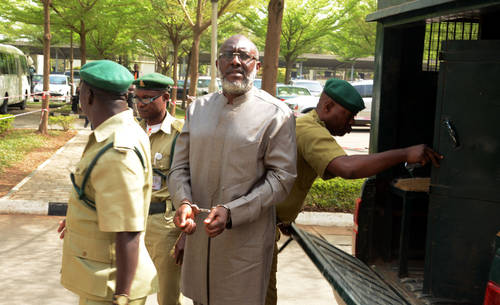 It has been learned that Mr. Dasuki illegally diverted $2.1 billion, much of which was used during the re-election campaign of the former President Goodluck Jonathan. Investigations into Mr. Dasuki’s illegal activity has implicated numerous top political and military leaders in Nigeria, including Mr. Metuh.

Mr. Metuh has also been ordered to surrender his international passport and provide two sureties (N200 million each) with properties in the Maitama district in Abuja. It will be recalled that SaharaReporters revealed that Mr. Metuh was planning to escape to the Caribbean island nation of St. Kitts and Nevis, where he had obtained citizenship following a sizable financial investment on his part.

Mr. Metuh was seen being escorted to court by law enforcement officials on Tuesday wearing handcuffs. He was previously in the custody of the Economic and Financial Crimes Commission (EFCC) and remanded to Kuje Prison in Abuja.