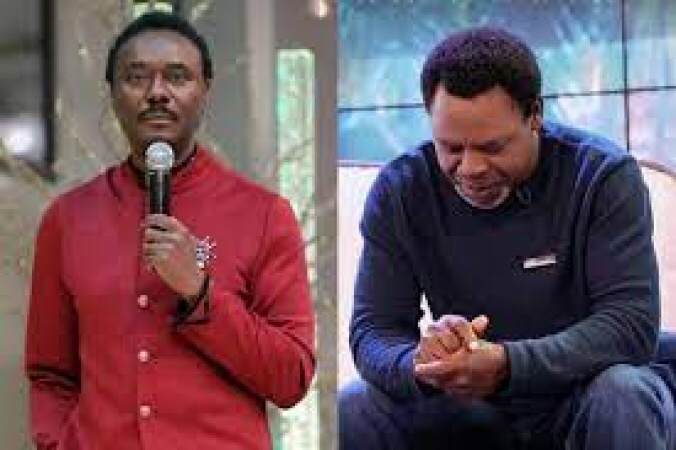 The Shepherd Superintendent of the Household of God Ecclesia, Rev Chris Okotie, has described the late founder of The Synagogue, Church of all Nations, Prophet Temitope Balogun Joshua, popularly known as TB Joshua, as a magician who carried Bible around.

Okotie, who has remained relentless in his criticism of Joshua, even while he was alive, had tagged the controversial miracle worker and philanthropist of Ikotun as “Wizard at Endor”, upon his death in June.

Okotie’s characterisation of Joshua did not go down well with many of his followers, admirers and dependents, who responded with venom, pouring all kinds of invectives on the grandiloquent teacher of the Bible.

But in what appeared to be a sequel to his ‘tribute’ to Joshua, shortly after his death, Okotie, on Sunday released a 75-minute video on YouTube, titled: ‘The truth about T.B. Joshua’.

The video which premiered by 6pm on the social media platform started with a staccato of queries on the identity, mission and ministry of Joshua.

“Greetings in the name of the Lord Jesus. What is the truth about TB Joshua? Who was he? Was he a product of Christianity? Or a practitioner of shamanism? Was he a servant of the Lord Jesus? Or some itinerant religious quack? Was he a true prophet, who was misunderstood? Or a hypocrite masquerading under the habiliment of the Faith?” Okotie fired in his opening statement.

Anchoring his message on the Bible book of John 8 v 32: “…Ye shall know the truth, and the truth shall make you free”, Okotie took a systematic critique of Prophet TB Joshua, starting with the name, Joshua.

He said: “Joshua took that name because he believes he is another Jesus. He believes that God sent him to our world to bring reconciliation between God and mankind, exactly the same way the Lord Jesus was sent, and that is why he took that name Joshua.”

To fully unmask the face behind the veil, Okotie launched into the deep of God’s word, the Bible, to draw a parallel, for according to him God works with patterns.

“When God begins a work in scripture, particularly from the Old Testament, He begins with patterns, what we call types, shadows, adumbrations. You say why, because the patterns determine the flow of power and authenticity of that enterprise,” Okotie explained.

Providing answer to the poser concerning the identity of Joshua, Okotie said the pattern is found in the Book of Acts, Chapter 13 v 6: “Now when they had gone through the island to Paphos, they found a certain sorcerer, a false prophet, a Jew whose name was Bar-Jesus.”