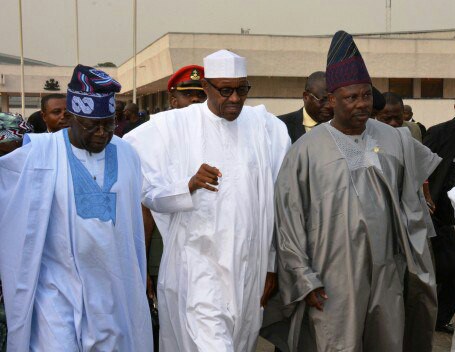 Governor Ibikunle Amosun of Ogun State had been battling with how to handle the transfer of power to his probable successor from the All Progressives Congress (APC) in 2019 after he must have served the constitutionally allowed two terms as Governor.

One person that was a torn in the flesh of the Accountant-turned-politician was the Senator that is currently representing Lagos West in the red chamber, Senator Adeola Solomon Olamilekan aka Yayi.

Yayi is from Yewa side of the state regarded as Ogun West Senatorial District.

Yayi’s campaign had gained momentum in the gateway state to the extent that Governor Amosun felt if care was not taken, Yayi might emerge as the party’s governorship candidate later in the year and this is against the plan of Amosun.

However, reports had it that the Governor decided to take his destiny in his hands and take the bull by the horn.

Sources informed us that Amosun went to President Muhammadu Buhari and the National Leader of the party, Asiwaju Bola Ahmed Tinubu and made them understand that they needed to intervene and call Yayi to order.

“He prostrated for Buhari and urged him to order Yayi to drop his governorship ambition in Ogun State. He told the President that Asiwaju Tinubu should be able to command Yayi to go back to the senate from Lagos since he is one of his boys.

“Amosun pointed out that since Asiwaju Tinubu is in-charge of reconciliation in the party he should be able to talk to Yayi to drop his governorship ambition and go back to the Senate.

“He told Buhari that the party should not continue to allow people like Yayi to disturb the peace of the party in Ogun State and that he should allow him to shop for a successor from the party,” said the source.

We were informed that Asiwaju Tinubu informed Amosun that he actually spent N10 Million for a survey, which he said showed that the people of Ogun State wanted Yayi as their next Governor.

Sources added that Tinubu told Buhari and Amosun that if what Amosun wanted was for Yayi to drop his Governorship ambition he had no choice than to co-operate with him.

It was revealed that Tinubu informed Buhari and Amosun further that the former Minister of state for Defence, Senator Musiliu Obanikoro would be asked to drop his ambition of going to the senate from Lagos West.

According to sources, Tinubu informed them that he only rescued Obanikoro from the mess in the Peoples Democratic Party (PDP) and that it was not a do or die affair for him to move to the senate now.

We gathered that President Buhari and Asiwaju Tinubu then resolved that Yayi should step down his governorship ambition and allow Amosun have his way of producing the party’s candidate for the 2019 general elections in the state, while he (Yayi) should be allowed to return to the senate from Lagos West.