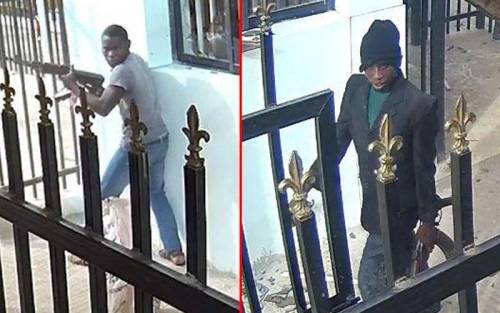 The Nigeria Police Force has kept mum over the investigation and
prosecution of suspects of the Offa armed robbery on April 5, 2018,
resulting in the killing of more than a dozen people including
policemen, bank workers, and customers.

The police have also not informed the public if the millions of naira
stolen by the robbers have been recovered.

Last December, the police said it had yet to recover the loot.

Five suspects were later arrested and arraigned before Ilorin high
court on the offence bordering on criminal conspiracy to rob the
banks, robbery of the banks, conspiracy to murder, the murder of nine
policemen and other innocent citizens, and illegal possession of
firearms.

Efforts by SaharaReporters to confirm if the police have concluded the
investigation and prosecution on the matter were unsuccessful as
several calls made to the telephone of the police spokesman, Frank
Mba, were not answered.

Mba also declined to respond to a text message sent to him.

In March this year, a suspect facing trial for his alleged involvement
in the April 5 bank robbery accused the police of forcing him to
indict Senate President Bukola Saraki.

The suspect, Friday Akininibosin, stated this while giving his
testimony at a high court in Ilorin, the Kwara State capital.

Akininibosin told the court that he had no personal knowledge of
Saraki before he was arrested and that a former policeman allegedly
involved in the robbery, Michael Adikwu, was killed for his inability
to go with the alleged plan of the prosecutors.

Shortly after the April 5 robbery, the police cited confessions made
by the accused persons during the investigation, as indicting Saraki.

The police also said a picture of one of the accused at a wedding with
Saraki emerged, linking the then-Senate president with the armed
robbers.

According to the police, the suspects alleged to have worked as
political thugs for Saraki who allegedly supplied them with
ammunition.

Saraki denied any wrongdoing and accused the police of victimizing him.

Akininibosin retracted his earlier stance and accused the police of
masterminding his confession which he claimed was written for him by
some policemen.

“My hands and legs were tied to the back and suspended in between two
tables by iron rod for like one hour 30 minutes. Then the senior
police officer, Abba Kyari, came around to tell me that I should say
that it was the Senate president that gave us guns to rob Offa banks,”
Akininibosin said.

“I told him my life is at stake here and that I wouldn’t do such.
Then, he said I should do that for them and that they’ll pay me and
thereafter set me free. I disagreed and was carried back to the cell
on his instruction as I couldn’t walk.”

The accused further revealed, “I was shot on my two legs. I was later
taken to Abba Kyari’s office, where he asked to know if I was ready to
cooperate and I said yes and pleaded not to kill me. The next day was
when Michael Adikwu was brought to identify us and say what connected
us together. The dismissed officer said he didn’t know us and after
much torture, he was shot dead in our presence.”

The police later confirmed Adikwu’s death in its custody but said he
died of natural causes.

Akininibosin said a journalist was later brought in who took his
confessional statement, allegedly made under duress.

“I was panicky, thinking I was next to die. Later, a female TV
journalist was brought by a police officer with a note, saying that
was what they wanted me to say, and that if not, I will ‘travel’,
meaning, I would be killed.

“That was how I agreed in the presence of the female journalist, who
recorded while I was also beaten at intervals.”

In October 2018, the Kwara State government accused the Nigerian
police of being economical with the truth regarding the April 2018
robbery suspects in Offa.

The police had reportedly blamed the attorney-general and commissioner
for justice for delaying the arraignment of the suspects.

They said they had concluded investigations and sent the case file to
the Attorney-General of the Federation and Minister of Justice,
Abubakar Malami, who directed that the file be sent to the state
Attorney-General.

Reacting to the police statement in Ilorin, Attorney-General and
Commissioner for Justice Kamaldeen Ajibade (SAN) described the police
utterances as ‘cheap blackmail’.

Ajibade said: “I see this as a cheap blackmail by the police. They
have something to hide, which they are yet to tell Nigerians. I am
sure at the end of the day, Nigerians will know what has transpired in
this matter. That is why the police are passing the buck.

“They can now see that Nigerians have started asking questions that if
you’ve arrested suspects since April and they are yet to be arraigned,
then there must be something about it. I urge people to ask questions
about this matter.

“I am surprised, particularly the statement coming from the police
spokesman, Jimoh Moshood. Moshood, without being personal, is from
Ilorin. He has contacts and I am sure he follows events in the Kwara
Command. He knows that the suspects are still with him at the police
headquarters.

“Why will he now mislead the public that we are yet to prosecute? How
can you prosecute people kept in Abuja in Kwara State High Court? It
is not possible.”

The attorney-general added, “I want to confirm to you that a letter
was written from the Office of the Director of the Public Prosecution
of the Federation under the Office of the Attorney-General of the
Federation. My office received the letter on August 27.

“The content of the letter had to do with the investigation report on
the Offa robbery and directing my office to take up the prosecution of
the matter.

“Immediately we received this letter on September 6, we wrote a letter
through the Office of the State Director of the Public Prosecution to
the Office of the Attorney-General requesting them to provide for us
the original case diary in the Offa robbery and to transfer the
suspects to Kwara State Police Command. We waited for about three
weeks and did not hear anything from them.

“I then met the AIG Legal, David Ogbodo and requested that the
original case diary be sent to Kwara to enable us to start prosecution
of the matter. I also requested him to send the suspects to Kwara
State and he told me that he had directed the man in charge. That is
Abba Kyari.

“We waited for another week, we could not get anything from them. So,
I directed my DPP to liaise with the police this time. He liaised with
the police both in the state and with Abbah Kyari. They promised every
day that they would send the suspects to Kwara and the original case
diary, to no avail.

“You cannot prosecute under the law without having the original case
diary. You cannot even file a charge without the case diary and in
filing a charge, you have to exhibit what we call proof of evidence.

“How do you file a charge? How do you prosecute people you cannot see?”