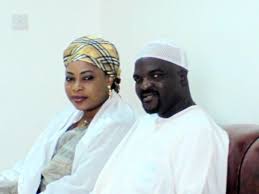 Fuji musician and new Alhaji Agba of fuji, Abass Akande Obesere, aka Omo Rapala and his wife Abike have been married for many years now and have five children.
It was gathered that he just completed his multi-million naira mansion in Ibadan, Oyo state. In a recent interview with Encomuim Weekly, Obesere confirmed he has completed the house which he revealed is for his wife.
He said: “It’s true but the house doesn’t belong to me, that’s for my wife. I am not the type that should be making noise about such things. But I thank God for everything.”
“I told God since more than 10 years I had built a house for my mother that I will do something similar for my wife as well because she really deserves it.”
“Now, God has answered my prayer. She’s a wife that stands by me at all time. So, if I have done more than that, she deserves it. And in few months, it will be opened officially.” The mansion is said to be located in Akobo area and is a storey-building with a big swimming pool and spacious car park.
Related Topics:
Up Next