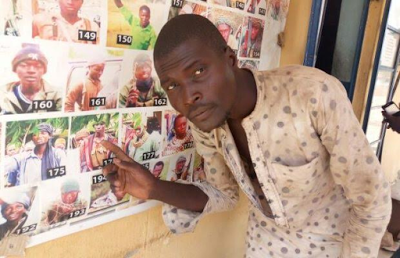 The Bauchi State Police Command said it arrested of a top Boko Haram fighter, Muhammad Adamu Nafiu, who confessed to having killed over 150 people in Baga Borno State. In a statement issued on Wednesday, the state commissioner of police, Garba Umar, said that the 25-year-old suspect is a notorious terrorist, who relocated to Tama village in Toro Local Government Area in order to evade arrest after the sect was dislodged by troops at Sambisa Forest.

“Preliminary investigation revealed that suspect was among those declared by the Nigerian Army on Serial Number 176 on its wanted list,” said the police commissioner.

“He has voluntarily confessed to have killed over 150 people in Baga LGA of Borno State alone. Case under investigation after which suspect would be handed over to the appropriate authority for discreet investigation.”

53 people arrested at a gay wedding in Zaria, couple on the run

How Lebanese Town is Built with Nigerian money