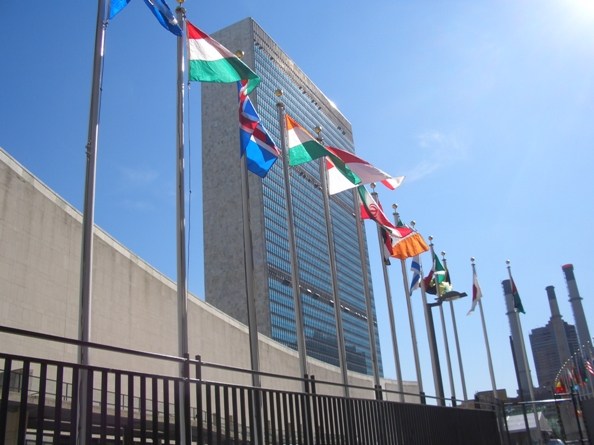 Some Nigerian women artistes on Sunday night “locked down” the UN headquarters complex in New York to spotlight various themes such as human trafficking, suicide bombing, and sexism and sexual harassment.

Tagged ‘Unity in Diversity: An evening of art and hope with Nigerian women’, it was meant to show the strength of women as agents of change in African societies often dominated by men.

The event, organised by UN Women, UN Population Fund and Nigeria’s Permanent Mission to the UN, with other partners, attracted dignitaries from all walks of life, filling the UN General Assembly Hall to capacity.

A film featured excerpts fromBlessing Itua’s book “We Are the Blessings of Africa” as well as monologues from Ifeoma Fafunwa’s “HEAR WORD!” and Nadine Ibrahim’s films “Tolu” and “Through Her Eyes.”

Fafunwa’s stage play “HEAR WORD! Naija Women Talk True” is a collection of monologues based on true-life stories of Nigerian women challenging social, cultural and political norms in the country.

Itua’s book and latest film followed human trafficking routes in Nigeria and Europe and aimed to be a statement about brutalisation of women and sexual violence.

It also highlighted the economic reasons that people choose to migrate in the first place and changed some of the misinterpretations about exploitative work practices, forced labour and smuggling.

Nigeria’s Ambassador to the UN, Tijjani Bande, said the event, which heralded the beginning of the 2018 Commission on the Status of Women, described it as “a great event”.

“I assure you that this is something that we want to keep doing yearly because of what it means for Nigeria. We have heard stories and stories that empower.

“We have seen dance performances, we have also seen and listened to rhythms from a very important book from one of our sisters.

“Clearly, the issues are about change, revolution, liberation and these are absolutely critical for our nation, continent and the world at large.

“This has been put up by Nigeria but Nigeria is always proud to relate itself with the world but in particular, to its region. Nigeria is part of Africa,” the Nigerian envoy said.

The Permanent Representative of the Observer Mission of the AU to the UN, Fatima Muhammed-Kyari, commended the artistes for their amazing talents.

Muhammed-Kyari added: “This evening was not just about an entertainment; I think everyone of the artists had an important message to pass.

“If there’s one thing you take back with you tonight, I think it should be this beautiful message that Nigeria is an incredible country with incredible people that deserve people and that our diversity is our strength.”

She said Nigeria’s diversity was part of what held the country together as a people and, therefore, could not afford to dismiss one another.

According to her, the issues raised, although coming from the Nigerian perspectives, were universal and everyone could relate to the issues that were raised by the performances.

Ms. Fafunwa said her stage play featured the ‘Nollywood’ actresses because they were well-respected by the Nigerian society and all over Africa and even the world at large.

“I brought in the ‘Nollywood actresses because first of all, they were interested in this kind of work, they themselves want to make a difference and make a change for Nigeria.

“But also when you have somebody who is respected in the community, saying the message, then that message is carried through even more,” Ms. Fafunwa said.