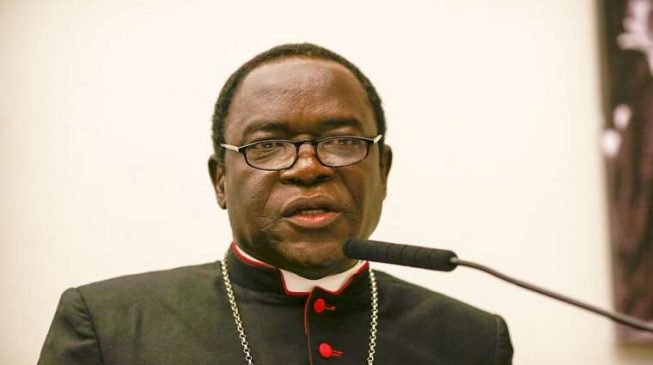 Matthew Kukah, Catholic bishop of Sokoto diocese, says Nigeria is on the crossroads and its future hangs “precariously” in a balance.

Kukah said this in Kaduna during his homily at the funeral mass of Michael Nnadi, a student of the Catholic Good Shepherd Seminary, Kaduna, who was abducted and subsequently murdered.

Gunmen had invaded the seminary on January 8, abducting four students, including Nnadi. Three of the students were released after a ransom was paid, but Nnadi did not make it out alive.

Lamenting over the nationwide insecurity, Kukah said: “Our nation is like a ship stranded on the high seas, rudderless and with broken navigational aids.”

“Today, our years of hypocrisy, duplicity, fabricated integrity, false piety, empty morality, fraud and Pharisaism have caught up with us,” he said.

“Nigeria is on the crossroads and its future hangs precariously in a balance. This is a wake-up call for us. As St. Paul reminds us; the night is far spent, and the day is at hand. Therefore, let us cast away the works of darkness and put on the armour of light (Rom. 13:12). It is time to confront and dispel the clouds of evil that hover over us.

“Nigeria is at a point where we must call for a verdict. There must be something that a man, nay, a nation should be ready to die for. Sadly, or even tragically, today, Nigeria, does not possess that set of goals or values for which any sane citizen is prepared to die for.”

‘POLITICIANS CAN GIVE UP THEIR LIVES TO SAVE THEIR OFFICE’

He said the average office holder in Nigeria is ready to die to protect his office but not for the nation that has given him or her that office.

“We have practiced madness for too long. Our attempt to build a nation has become like the agony of Sisyphus who angered the gods and had to endure the frustration of rolling a stone up the mountain,” he said.

“Each time he got near the top, the gods would tip the stone back and he would go back to start all over again. What has befallen our nation? Nigeria needs to pause for a moment and think. No one more than the President of Nigeria, Major General Muhammadu Buhari who was voted for in 2015 on the grounds of his own promises to rout Boko Haram.”

Accusing Buhari of falling below standard, Kukah said: “No one could have imagined that in winning the presidency, Buhari would bring nepotism and clannishness into the military and the ancillary security agencies.

“No one could have imagined that his government would be marked by supremacist and divisive policies that would push our country to the brink.

“This President has displayed the greatest degree of insensitivity in managing our country’s rich diversity. He has subordinated the larger interests of the country to the hegemonic interests of his co-religionists and clansmen and women.
“The impression created now is that, to hold a key and strategic position in Nigeria today, it is more important to be a northern Muslim than a Nigerian.

“Today, in Nigeria, the noble religion of Islam has convulsed. It has become associated with some of worst fears among our people.
“Muslim scholars, traditional rulers and intellectuals have continued to cry out helplessly, asking for their religion and region to be freed from this chokehold.

“This is because, in all of this, neither Islam nor the north can identify any real benefits from these years that have been consumed by the locusts that this government has unleashed on our country.”

‘THE NORTH IS A LARGE GRAVEYARD’

He said even Buhari’s “north has become one large grave yard, a valley of dry bones, the nastiest and the most brutish part of our dear country.

“Why have the gods rejected this offering? Despite running the most nepotistic and narcissistic government in known history, there are no answers to the millions of young children on the streets in northern Nigeria, the north still has the worst indices of poverty, insecurity, stunting, squalor and destitution,” he said.

“His Eminence, the Sultan of Sokoto, and the Emir of Kano are the two most powerful traditional and moral leaders in Islam today. None of them is happy and they have said so loud and clear. The Sultan recently lamented the tragic consequences of power being in the wrong hands. Every day, Muslim clerics are posting tales of lamentation about their fate. Now, the Northern Elders, who in 2015 believed that General Buhari had come to redeem the north have now turned against the President.

“We are being told that this situation has nothing to do with Religion. Really? It is what happens when politicians use religion to extend the frontiers of their ambition and power. Are we to believe that simply because Boko Haram kills Muslims too, they wear no religious garb? Are we to deny the evidence before us, of kidnappers separating Muslims from infidels or compelling Christians to convert or die? “If your son steals from me, do you solve the problem by saying he also steals from you? Again, the Sultan got it right: let the northern political elite who have surrendered the space claim it back immediately.”