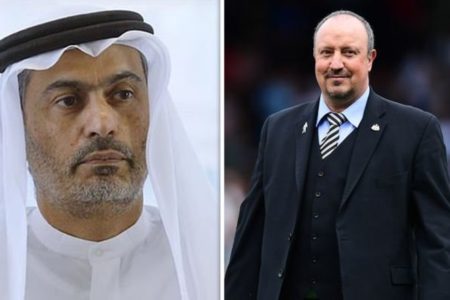 His representatives told Sportsmail on Sunday night that a deal is ‘concluded’ between Mike Ashley and Sheik Khaled, an Emirati member of the family who governs Abu Dhabi.

The representatives also insisted that the prospective new owner is very keen to keep Rafa Benitez as manager of the club and that the takeover is expected to be done in time for this summer’s transfer window.

Sheik Khaled bin Zayed Al Nehayan who is a member of the ruling family of Abu Dhabi and half-brother to Manchester City owner Sheik Mansour is believed to be a billionaire and has interests in the construction, energy and real estate sectors among others.

Both Sheik Khaled and City owner Sheik Mansour are sons of the late Sheik Zayed bin Sultan Al Nehayan, President of the UAE and ruler of Abu Dhabi. Khaled is the youngest of 19 sons.