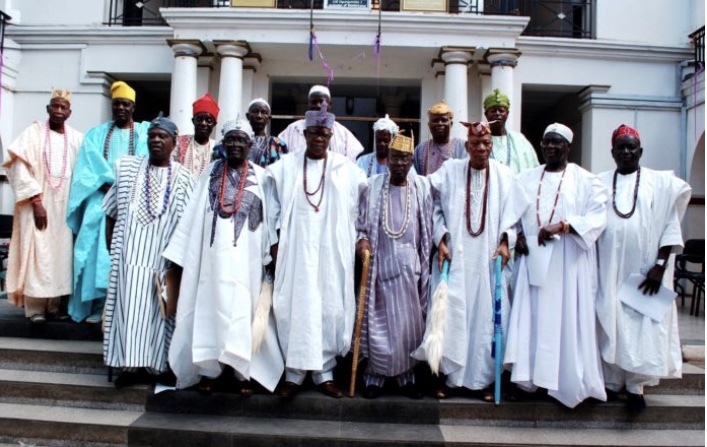 The rift between Olubadan of Ibadanland, Oba Saliu Adetunji, Aje Ogunguniso 1 and his chiefs made obas against his will has reached a climax as the latter on Monday issued a notice of dethronement to the former who has been accused of acts unbecoming of his office as the paramount ruler of the ancient town.

At a press conference, the 21 obas who were installed on August 28, 2017 by Governor Abiola Ajimobi led by Oba Lekan Balogun, the Otun Olubadan of Ibadanland, highlighted Olubadan’s ‘sins’ against them, stressing that except he retraced his steps within 21 days, they would recommend his removal to the state governor.

Oba Adetunji’s crime against his chiefs turned obas included taking actions on behalf of the Olubadan-in-council without involving the new obas, inciting people against them as well as refusing to resolve pending issues among them.

According to to the address read by Oba Balogun, “Olubadan-in-Council meetings are not conducted the way they are supposed to be. Oloris were still attending meetings with us and contributing, dictating, attacking that resulted to abuses and curses on the High Chiefs.

“The appointment of Baales and Mogajis are not in compliance with proper set up rules and standards.

“Apart from the monetary scandals of which kabiyesi is yet to refrain, a new Olubadan-in-Council is inside Popoyemoja palace consisting of Olubadan, the Oloris and PA to Olubadan (Tairu) who decide from time to time who is to be Baale or Mogaji and will only send Hearing Notice of meeting and agenda to the real members of Olubadan-in-Council on Saturday preceding the installation date on Monday.

“The Olubadan, Oba Adetunji has since after the inauguration of the Beaded Crown Obas in Ibadan cultivated himself to misbehave by engaging in acts to cause civil disorder by parading himself about with some unscrupulous Mogajis in Ibadan land, inciting people to rise up against the legitimate government of our amiable governor of Oyo State, Senator Abiola Ajimobi.

“This is a serious offence which we the Ibadan Council of Obas can pass a vote of ‘No Confidence’ on him, after which we as king makers that nominated and appointed him for confirmation and approval by the Executive Governor will also call for his removal. We are by this conference giving His Imperial Majesty 21 days ultimatum to change his stand now and work for the improvement of Ibadan rather than disorderliness”.

The Ibadan obas further accused Olubadan of allowing interests within and outside the palace to manipulate him to their own advantage.

Relationship between the Olubadan and most of the council members has rapidly degenerated since Governor Ajimobi reviewed and approved the recommendations of an 11-man Judicial Panel of Inquiry raised to review the laws guiding the chieftaincy system in Ibadan leading to the emergence of the new obas.

20 YEARS AFTER, FG COMPLETES HANDING OVER OF PRESIDENTIAL LODGE, MARINA TO LASG