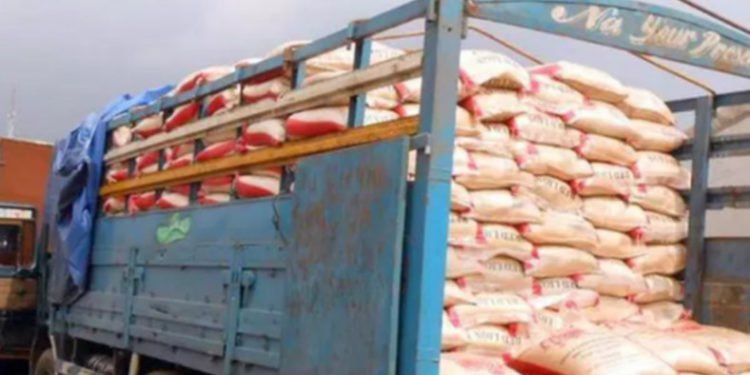 The Nigeria Navy forward operating base (FOB) at Ibaka in Mbo local government area of Akwa Ibom has arrested 24 suspects with 1,831 bags of smuggled rice.

Peter Yilme, the commanding officer of the FOB, disclosed this to journalists in Ibaka, on Sunday.

Yilme said five wooden boats used in smuggling the rice from Cameroon to Nigeria were also seized, and that the arrest was made during routine operations by operatives in the past one month.

Yilme, who was represented by Kabiru Yusuf, base operations officer, during the handing over of the suspects and items to the Nigeria Customs Service (NCS), said the command would remain steadfast in fighting criminals on Nigeria’s territorial waters in line with the directive of the chief of naval staff.

Dauda Garuba, an officer of the NCS, received the suspects and items from the navy.

Two of the suspects claimed they were not told that they were to carry bags of rice from Cameroon to Nigeria while another said he was told that he would be transporting fish.

He said it was when the rice was loaded into the boat that he realised that he would not be conveying fish as told.

The federal government closed Nigeria’s land borders in August to check smuggling. While some Nigerians condemned the action, other citizens praised the government’s initiative.

In October, the Gombe state chapter of Rice Farmers Association of Nigeria (RIFAN) expressed its support for the border closure, saying farmers in the country can produce enough rice to feed Nigerians and to export.

Kalagar Lubo, state secretary of RIFAN, said the closure is a positive development that will promote the production of fresh locally made rice.

“With the extension of rains to the end of October, the yield will be good. The home production is very good, first it is fresh and the value is good. If the border is opened the farmer will not have it good. When you buy a bag at N10,000, it will cost you just N20,000 for two bags. When you go to the market, a bag of foreign rice is sold at N18,000,” he had said.

Garba Shehu: It’s not wrong to have a cabal at the presidency