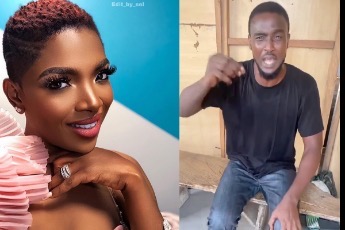 Annie Idibia’s brother, Wisdom, has accused her of being a drug addict who, according to him, has turned him into a slave and refused to help him.

Wisdom who made the allegations in a video that surfaced on Tuesday night, accused Annie, wife of TuFace Idibia of using him like a “slave”, and introducing him to hard drugs.

“I am crying out for help now, my life is being threatened. I have been working with my sister but she would never pay me my dues. She would rather send me N20,000, N30,000. She turned me to her slave,” he said.

“Some weeks back, her husband sent me some money. I have been begging him for years. The money wasn’t so much but I used it to settle my home.”

He accused her sister of taking drugs and of introducing him to the substances.

“Annie introduced me to drugs, hard drugs. Annie takes drugs. She is a drug addict. She takes it everyday. She is so violent.”

Wisdom claimed that Annie took away everything from him after he left for two weeks to settle some personal issues, even as she has refused to give him a vehicle to do ride hailing.

According to him, “I have been begging my sister for a car to do Uber for many years now, so that on my own, I can be able to provide for my wife and three children. My sister has never responded to me.”