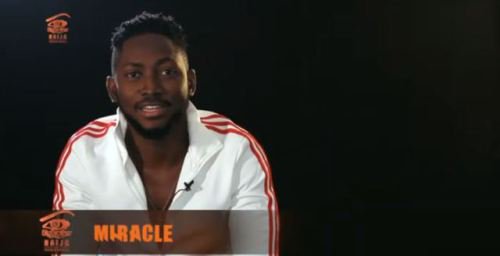 Big Brother Naija 2018 winner, Miracle has finally addressed reports making the rounds that he is in a relationship with a ‘Sugar Mummy’ simply identified as Juliet.

The internet was agog over the weekend with claims and pictures that the winner of the just concluded BBNaija reality show, Miracle, had a sugar mummy.

However, Miracle’s brother, Captain Igbokwe, has reacted to the allegation on behalf of his brother.

Captain Igbokwe, who took to his Instagram page to address the issue in a video, said the woman known as Juliet was actually their aunt.

He said it was disrespectful for anyone to allege that Miracle had anything amorous to do with his own aunt.

He said “Juliet is Miracle’s aunt, it is insulting because someone is hurt or you have been unable to see Miracle outside the house then try to fabricate stories.

“In our family, we love each other dearly and down to earth. And then someone calls my aunt, my brother’s sugar mummy it is unfair. How do you expect people to see her in public, this is a woman who has a reputation?”

Over 7000 dump APC for PDP in Plateau