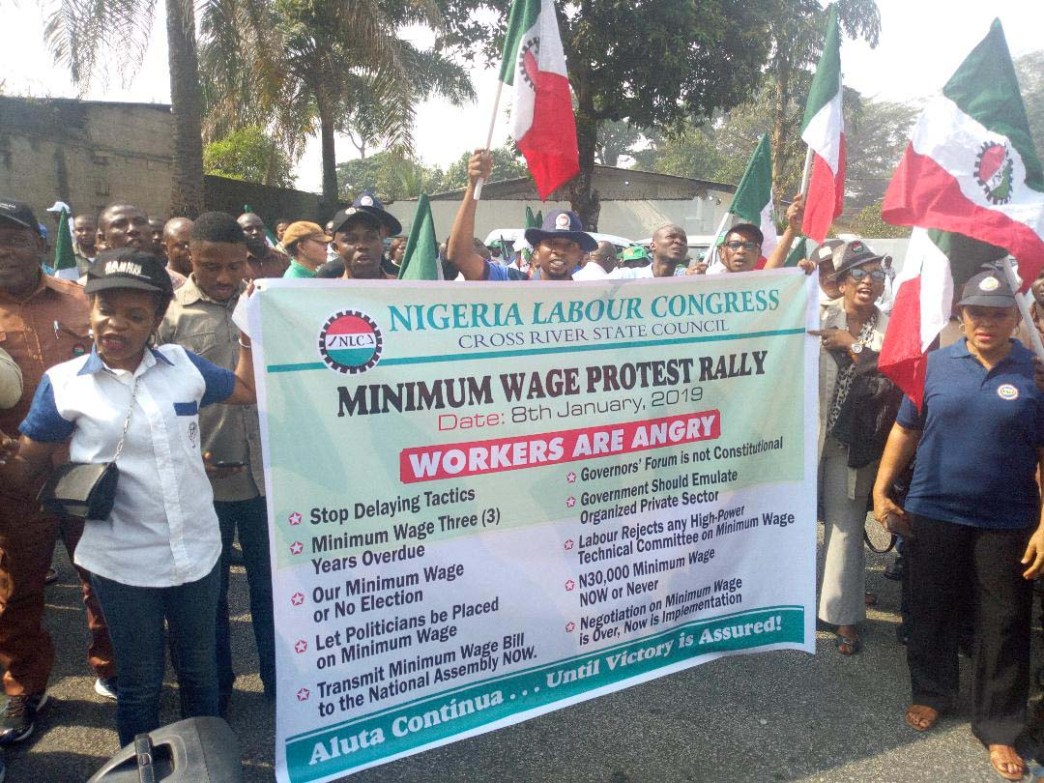 Dozens of protesters gathered at the Nigeria Labour Congress (NLC) office in Abuja, on Tuesday to protest government’s lethargy in approving a new minimum wage for workers in the country.

The NLC President, Ayuba Wabba, who led the protest alongside other union members from the Labour House, marched across parts of the capital city, ending at the Federal Capital Territory Administration (FCTA) premises.

The protest follows an earlier meeting of union representatives presided over by the minister of labor and employment, Chris Ngige.

While addressing journalists and the union leaders, Mr Nigige said the meeting was to prevent the planned protest.

NLC had threatened to embark on a over the federal government’s refusal to send the tripartite committee report on the minimum wage on N30, 000 to the National Assembly

Mr Wabba said the labor leaders agreed to meet with the government to ensure that the processes for the transmission of the bill on a new minimum wage would be completed.

“We will go ahead with the mass protest nationwide,” he however said.

Later on Tuesday after the protest, the Nigerian government said it will send the bill to the lawmakers on January 23.

The federal government has repeatedly dithered on the labour’s demand for a new wage figure, refusing to commit.

President Muhammadu Buhari, seeking reelection had instead assured he would review the recommendation and send a bill backing a new wage figure to the National Assembly.

At the protest, Mr Wabba said the union had been patient over the years but can no longer tolerate the government’s action over the minimum wage.

”The Nigerian minimum wage of N18,000 is no more tenable, we have been patient and considerate on the national interest, that is why we agreed on 30,000. The primary purpose of government is the provision of the welfare of its citizens,” he said.

He urged state governors to stop hiding under the umbrella of the governor’s forum to refuse to pay the proposed new wage.

”Let our political elite tell the workers their position and not hide under the governor’s forum and say they won’t be able to pay.

”What the constitution recognise is individual states. I heard an argument of one of the political gladiators who said the minimum wage should be left for the states to fix. It is an aberration because if it is left for the states alone who fixes for the private sector. I think that person does not understand governance,” he said.

A senator at the protest, Shehu Sani said the N30,000 ”is modest for an oil producing country like Nigeria”.

Mr Sani the new minimum wage, if approved would empower the workers and help address some of their social and economic problems.

He said it was sad that while the Nigerian elite are busy spending millions of funds on political campaign, ”they say there is no money to increase the minimum wage of Nigerians”.

”The demand of the Nigerian workers is modest for an oil exporting country like Nigeria,” he said. ”If we increase the minimum wage, we are empowering the citizens and solving the social and economic problems. If they resist then it is not right, let us not forget this government came on the determination at solving the suffering of Nigerians workers.”

Meanwhile, the director, human resources management, Lazarus Gaza, who represented the FCT minister assured the unions that the letter they brought along would be delivered to the minister ”and the minister would act”.

Nigerian govt disburses $49 million to Yobe, Osun under ‘save one million lives’ fund