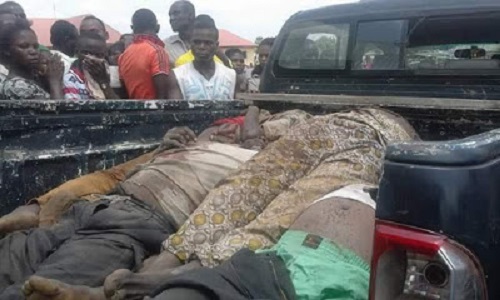 The death toll from the attack on communities in Logo Local Government Area of Benue State by suspected Fulani herdsmen has risen to 59, a lawmaker representing the constituency in the State House of Assembly, said on Sunday.
The herdsmen, said to number over 3000, spread across Turan council ward in Logo LGA and were moving round, destroying houses and farms between late Saturday night and early hours of Sunday.
The attack by the herdsmen reportedly left a large number of members of the community with varying degrees of injuries while several others were still reported missing and property worth millions of Naira destroyed.
A source said the armed herdsmen stormed the Gabo Nenzev community in large numbers from the neighboring Nasarawa State, shooting sporadically and burning down houses at sight.
This was also as the marauders invaded Ugondo, also in Logo LGA, killing no fewer than 15 persons on Saturday.
The attacks came less than a week after Governor Samuel Ortom sent an Executive Bill to the state House of Assembly, criminalizing cattle grazing in the state.
Confirming the attacks, the member representing Logo State Constituency in the Benue House of Assembly, Mr. Kester Kyange, said “as of this morning (Sunday), the calls I made confirmed to me that about 59 persons including a traditional ruler were killed while many others are still missing. The women, children and the elderly have all fled their homes to take refuge in Ugba, headquarters of Logo LG”.
The lawmaker said he had already visited his constituency to commiserate with the families of victims and met with the council leadership, traditional rulers and security agencies to find lasting solutions to the insurgency.
Kyange, however, called on President Muhammadu Buhari to come up with a clear policy that would end the incessant clash between Fulani herdsmen and farmers in the country.
In a related development, the Benue Police Command spokesman, Moses Yamu, confirmed that there were other attacks in the early hours of Sunday, disclosing that more mobile policemen had been drafted to the area to forestall further attacks.
Mr. Yamu, an Assistant Superintendent of Police, said the police had been mobilised and deployed to the area to ensure that the incident did not escalate beyond the present level.