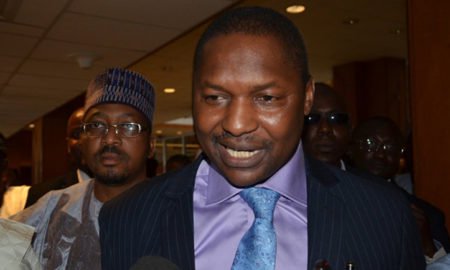 The Attorney General of the Federation and Minister of Justice, Abubakar Malami wants the senate’s committee probing his involvement in the reinstatement of wanted ex-Chairman of the Presidential Task Force on Pension Reforms, Abdulrasheed Maina, into the federal Civil service, to conduct its activities in public and not in secret.

Malami said he was openly vilified for allegedly ordering Maina’s reinstatement, and that as such, the idea of trying him in secret was unacceptable.

Speaking with Vanguard, he said: “I want to address Nigerians directly on the Maina issue when I appear before the Senate.

“But I understand the committee to probe the allegations against me and the Minister of Interior wants to do so in camera.

“Trying me in secret after I have been vilified openly by the people is not good enough. I will certainly appear before the committee at eleven o’clock (11.am) on Tuesday(tomorrow) to speak on the matter but if they bring up the issue of trying me in camera, I would recuse myself from the matter and seek alternative way to explain my position publicly to Nigerians.”

Recall that the Senate committee investigating Maina’s reinstatement into the Federal Civil Service had last week said the probe would be done behind closed doors.

The Chairman of the Senate adhoc committee set up to investigate the matter, Emmanuel Paulker made the disclosure while addressing journalists in Abuja.