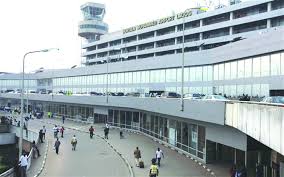 The Murtala Muhammed International Airport (MMIA), Lagos was again today charged due to the inability of Med-View Airline to ferry its passengers out of the airport to their various destinations.

The passengers who were supposed to have been airlifted to London and its new route, Dubai have been stranded at the airport since last Sunday without any concrete information from the management of the airline.

At the international wing, our correspondent observed that the counters of the airline were deserted after the attack of its counter staff by the irate passengers.

The passengers lamented that their flights had consistently been canceled by the airline without any recourse to recommended standards and practices by the airline.

Some of the aggrieved passengers, numbering over 50 protested to the table of the Consumer Protection Directorate (CPD) of the Nigerian Civil Aviation Authority (NCAA) at the international airport, complaining that they had been abandoned by the airline.

One of the passengers, who gave his name as Olusoji, lamented that he was supposed to travel out of the country since last Sunday, but was still stranded in the country without any hope of traveling out very soon.

Olusoji, urged NCAA to take a decisive measure against the airline, saying that the carrier in recent time had taken an interest of passengers with levity while the regulatory authority looked the other way.

He said: “We are not happy with the treatment that has been meted out to us by the airline. We have consistently been abandoned by the airline. Some of us were supposed to be out of this country since last week, but here we are, still in Nigeria without any hope of traveling out very soon.”

However, as at the time of filing this report, some of the passengers of the airline on the Lagos-London route had been deployed on Ethiopian Airlines, Kenyan Airways, and RwandAir while the Dubai-bound passengers were yet to be redeployed on another airline.

But, Med-View in a statement on the flight cancellation attributed it to a technical issue on its equipment in London and the recent holidays in London.

Mr. Michael Ajigbotosho, the Chief Operating Officer of the airline in London, said that the aircraft had to embark on an air return as part of safety measures.

He also stated that the airline had got approval for three aircraft to airlift at least 700 passengers, but for the unruly behavior of some passengers, which made Border Force wade in and eventually only two of the flights could leave.

He said: “Our flight VL 2101 out of London to Lagos on Friday, December, 22, which has about 300 passengers on board returned back to Gatwick after departure as a precautionary measure taken by the Pilot- in – Command (PiC) in line with aviation standard and recommended practices.”

“This led to the cancellation of the flight as the aircraft was declared AOG (Aircraft On Ground). The passengers were catered for, they were lodged in a hotel and those who decided to go back home were also taken care of.”

“After the aircraft was declared AOG, we had to wait for a maintenance report. The aircraft had to remain on the ground until a certified expert carried out the necessary checks and certify that the aircraft is airworthy. And the holiday compounded the problem.”

“We announced to operate three flights feeling the concern of all our passengers. On Wednesday, December 27, we positioned three aircraft after securing the approval of the CAA including Nigerian authority.”

“Disappointingly, due to the unruly behavior of some Nigerian passengers, the Border Force had to intervene to support the operations for crowd control purposes.”