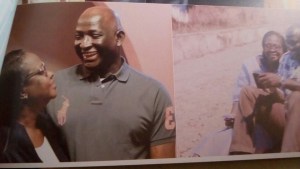 Pastor David Oluwole Kofoworola Obanure was born on 6th August 1954 in Minna, Niger State. The late Assistant General Overseer of the Redeemed Christian Church of God 9RCCG) was a man of honesty, hard work and uncompromising love for Jesus Christ and His body. He imbibed virues such as transparency, accountability, unfeigned love, sacrifice, forgiveness, marital fidelity and true friendship, virtues he imbibed from our Lord Jesus Christ and his role model and father-in-the lord, Pastor E.A Adeboye. The strict discipline of his policeman father, Elder A.S.A Obanure, loving support of his genial mother, Madam R.A.J Obanure, both ardent C.A.C members, and his towering influence and impact of a godly mentor, Pastor E.A Adeboye, the General Overseer of the Redeemed Christian Church of God (RCCG) were instrumental in shaping the life of Pator Olu.

Pastor Olu is of royal ancestry. His paternal grandfather was HRM Oba Obanure Otemola 1, the 15th Eleta Oluyara of Iyara, Alaga Olujumu of Ijumuland and a Native Authority Judge from 1943-1952 and his matwernal grandfather was Eleta Olubiyo Fayomi, the Eleta Oluyara from the Royal Abomila Family. Young Oluwole moved around Nigeria as a child, for his father, a policeman, was transferred often and the family moved on transfers from Zaria, Kafanchan, Kaduna, Jos, Otukpo, Ilorin and Lagos. This foreshadowed his moving around Nigeria, Africa, Europe, the Americas, and Israel etc on the business of His Royal Father, the Lord Jesus Christ. In the course of these cross-country movements, Oluwole started primary education at the Holy Trinity Primary School, Kafanchan in 10960 and later moved to St. Michael’s Primary School, Kaduna, where he finished his primary education in 1966. Secondary education took him to St. John’s College, Kaduna, now Rimi College and Higher School Certificate (HSC) took him to Government Secondary, Ilorin.

The young intellectually endowed OPlu wrapped up his primary, secondary education and HSC with distinction and preceded to the Ahmadu Bello University, Zaria, where he obtained a degree in Political Science and earned a Master’s degree in Communication and Language Arts from the University of Ibadan in 1984.

He gave his life to Christ in 1982 in Ilorin, with Mr. Vincent Egbunu, Brother Charles Achanwa and Rev. Emmanuel Oset being great influences in bringing him to Christ and following him up. In the same year, he commenced post graduate studies in the University of Ibadan, where he met his jewel of inestimable value, Olayemi Grace Bolanle Olowodola and on 10th May, 1986 they were married. Studying in the University of Ibadan offered Olu the rare opportunity of partaking in the discipleship investment of Pastor E.A Adeboye, who held regular meetings with the University of Ibadan Christian Union and the latter’s anointed messages influenced Pastor Olu’s determination to join the Redeemed Christian Church of God in 1984. He started at the Ebute-Metta Headquarter Parish, The Throne of Grace, where he became a worker and served as an usher and was later transferred to the Apapa Parish under the able leadership of Pastor Tony Rapu. Pastor Olu joined the ministry as a full-time member of staff in 1994 and enoyed the full support of his wife.

Fervent, zealous, passionate about issues that touch on the kingdom of God and soul winning, he derived his greatest joy from leading people to Christ and praying for them. Like his mentor, Pastor E.A Adeboye, two of the secrets of this man of God were his daily prayer walks, which afforded him the privilege of worshipping God and drawing closer to Him and saying thank you for little favours. An impassioned follower of Christ and a committed Christian, Pastor Olu Obanure shared the truth about the gospel of Jesus with contagious joy and zeal. A cerebral, warm, affable, kindhearted and patient man, who loved God passionately, an ardent worshipper and one, who had knack for remembering names, telephone numbers and information, Pastor Olu challenged all he came in contact with to fully maximize the Grace of God upon their lives.

The Grace of God, good upbringing that was hinged on the fear of God and intellectual gifting were the molding blocks of the life and ministry of Pastor Olu, the soft spoken, respectful, amiable and highly cerebral shephered of God’s people. As God added to him in ministry, He was also mindful to increase him with the blessing of the womb as He blessed the family with precious children, Oluwatomi, Oluwabusola, Oluwapelumi and TireniOluwa.

In 1997, Pastor Olu was appointed State Pastor in-charge of FCT, Niger and Nasarrawa and to the Glory of God only, the church witnessed exponential growth. In 2003, he and his family were transferred to Abeokuta from where he was later moved to Ebute-Metta, Lagos in the multiple capacities of Special Assistant to the general Overseer for Administration and Personnel, Regional Pastor for RCCG Region 1 and Provicianl Pastor of RCCG, Lagos Province 12.

The rather herculean task was made easy through the help of the Holy Spirit and wonderful assistants, in addition, the serenity of the Redemption Camp atmosphere, where the family lived provided opportunity for prayer, meditation and planning. Just as he moved around Nigeria in his early years, his call was to be on the move for his Master, Jesus Christ. For in August 2010, he was transferred to Accra, Ghana as Special Assistant to the General Overseer for West Africa (Nigeria exempted) with spiritual and administrative oversight for 15 countries with four language zones; (Anglo-phone, Franco-phone, Luso-phone and Arabic). The post involved enormous responsibilities, more prayers and travelling and God’s Grace was sufficient. Apart from English, he spoke Hausa, had a smattering knowledge of French and he must have communicated in tongues qwith his parishioners from Luso-phone West Africa!

Indeed, mercy kissed grace for Pastor Olu Obanure. The delicate combination of MERCY, the divine element in God’s economy that completely cancels punishment and grants pardon to the point of justification and GRACE, the divine enablement that empowers the one justified by mercy to perform supernatural assignments for God and His kingdom saw Pastor Olu move from small beginnings to the elevated position of Assistant General Overseer-a post with expansive responsibilities ministerially, spiritually and operationally.

His major focus was Heaven and his strong desires: holiness, forgiveness and Christlikeness, these he pursued till this soldier was called home on 2nd May, 2017.