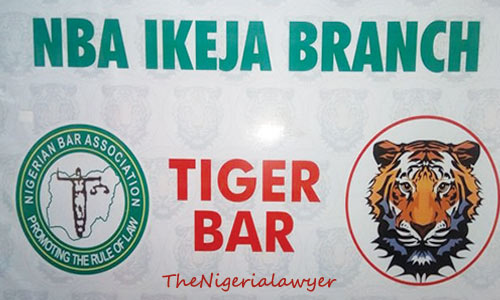 Some members of the Ikeja Branch of Nigerian Bar Association, NBA has raised an alarm of an alleged looting of the funds of the branch by the Chairman of the branch, Mr Adesina Ogunlana.

The members in a statement circulated in the social media noted that it is strange that despite several petitions over the brazen misappropriation of the branch funds, the national body of the association has refused to initiate an investigation into the matter.

The members, however, stated that a discreet investigation revealed that over N29 million has so far been siphoned from the association’s account and transferred to Ogunlana’s account.

The statement reads:”Having waited in vain to get the positive reaction/s of the president of the Bar to the petition they had earlier on written to him , a discrete investigation was carried out by some concerned members of the branch on just one of the major Accounts of the branch and the revelations are startling, confounding and mind blowing.

“The transfers of the money to the personal account of Mr Adesina Ogunlana were not only massive, they were regular and persistent.

“The withdrawals from Wema Bank Account of the Nigerian Bar Association domiciled in Ikeja and paid into the personal Account of Mr OGUNLANA ADESINA IBIYEMI in First Bank Account Number 2004528818 were as follows:

The one transferred from Zenith Bank (Gani Fawehinmi Account) of the NBA into the same First Bank of Mr Ogunlana Adesina is as follows:

The one transferred from UBA Account of the NBA Ikeja into the First Bank Account of Mr Ogunlana Adesina Esq is as follows:

THE  ALLEGED TOTAL SUM OF MONEY THAT PASSED FROM THE NBA ACCOUNTS INTO THE FIRST BANK ACCOUNT OF MR OGUNLANA ADESINA WITHIN JUST ONE YEAR OF HIS ADMINISTRATION WITHOUT THE KNOWLEDGE AND CONSENT OF THE CURRENT SECRETARY AND TREASURER  WHO OUGHT TO BE SIGNATORIES TO THE NBA IKEJA ACCOUNTS ARE IN THE SUM OF THIRTY TWO MILLION , SIX HUNDRED AND TEN THOUSAND NAIRA, (32,610,000 Naira).

“The following riddles need to be solved and urgently too by the branch since the National President has refused, neglected and or failed to look into the allegations.

1. Which Exco sat and approved all these monies? Are there minutes of meeting were these approvals were discussed and approved by the Exco?

2. Who are the signatories to these accounts were these monies were withdrawn?

3. Who is in charge of the chequebooks of the branch, Chairman or the Treasurer?

4. Why were these monies not paid directly to contractors and what is the justification for transferring these funds into the Chairman’s personal account?

5. Is it true that the signatories to these unlawful and unauthorised payments into the Account of Mr Ogunlana were Mr Farounbi and Mrs Kappo the former Chairman and Treasurer of the Branch who have ceased to be officials of the branch since two years ago? Is Mr Seyi Olawuyi who was also a signatory of these Accounts aware of these illegal withdrawals and if yes, what role/s did he play in all these financial malfeasance and recklessness by the Chairman?

6. Is it true that the current Treasurer and Secretary have no knowledge about these massive transfers from these accounts into the personal account of Mr Ogunlana Adesina?

7. Is it true that most of these monies paid into the Personal Account of Mr Ogunlana Adesina, the Chairman of NBA Ikeja Branch were withdrawn directly by him, NBA driver one Mr Segun Onasanya and the Secretary one Nkiruka Ujoke and one of his aides by name Segun too? To what extent was his family members involved in partaking in these fraudulent financial windfalls?

8. Is it true that a lot of other cash which belongs to the Branch were taken directly from Queen, the Lady Clerk in the Secretariat who usually insist that anyone taking cash from her directly must acknowledge receipt of the same with his or her signature? Could the branch demand for these signatures from the Bar Clerk to ascertain accurate amount taken from her in cash in the last twelve months?

9. Could the Branch in the Annual General Meeting set up a committee that will look into the Bank Accounts details of the Branch comprehensively to ascertain the extent of misappropriations of the Branch funds over these years? Can’t the Leaders of the Branch come into this to ensure that disciplinary measures are taken against anyone found culpable in these massive looting of our funds?

10. Could the branch ascertain why the Branch Chairman will withdraw several millions of these monies paid into his account for himself and family? What did he buy for the branch with these massive withdrawals? Explanations need to be offered for all the withdrawals till date.

11. Is it true that the last administration was also culpable with the finances of the branch which went undetected and unascertained due to the perennial complacency of the branch members even though they call themselves “Tigers”?

12. Would the current Treasurer who was the Financial Secretary of the last administration be bold enough to tell the branch members of the various financial malfeasance of both the last administration and the current one which she has been part of? Constitutionally she owes that responsibility to the members. So many questions begging for answers.”

Our Branch has been gang-raped by Mr Adesina Ogunlana and his cohorts due to the complacency and carelessness of the members. Ogunlana devised the strategy of mobilising members for Aluta Continua on the streets while his looting continues by the sides.

NBA Ikeja must wake up, look into these serious infractions, recover the looted funds AND ensure that the looters are brought to justice.

These issues were raised by two members of the Branch by name Mr Dan Okoye and Mr Gabriel Opayinka and supported by several other members who are waiting to see that justice is done on this matter! We need action now or never.”

When The Nigeria Lawyer contacted the NBA Ikeja Branch chairman, Mr. Adeshina Ogunlana over the weighty allegation against him he said that he has no response to the allegation as the makers of the allegation did not state their identity.

In his words “ This is nothing more but Politics. I will not respond to the frivolous attack on my person”.