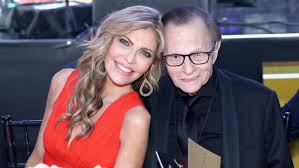 Larry King’s widow Shawn King has shared her husband’s cause of death as well as his moving final words to her.

In a recent interview with Entertainment Tonight, Shawn King said her husband died as a result of sepsis, a life-threatening condition that occurs in reaction to an infection.

Earlier in January, Larry Ling was treated for Covid-19, but according to Shawn King, he had recovered from the illness by the time the sepsis occurred.

“It was an infection, it was sepsis,”

“Well, he was finally ready to go, I will tell you that. You know, he never wanted to go but his sweet little body was just, it had just been hit so many times with so many things and once we heard the word COVID, all of our hearts just sunk.

“But he beat it, you know, he beat it, but it did take its toll and then the unrelated infection finally is what took him, but boy, he was not gonna go down easily.”

In the same interview, Shawn King said she and her husband were able to speak via FaceTime while he was in the hospital.

“It was hard for him to talk, but the one message that he wanted to make sure I heard was, ‘I love you, take care of the boys,’” she said.

The pair have two sons: Chance King, 21, and Cannon King, 20.
Related Topics:
Up Next