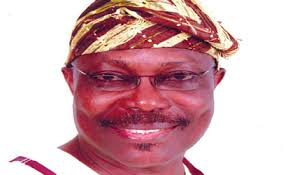 Chairman of the Peoples Democratic Party (PDP) in Lagos State, Hon. Moshood Salvador has announced his defection from the party to the ruling All Progressives Congress (APC).

Salvador, who spoke to journalists at his residence in Eric Moore, Surulere, Lagos on Monday revealed that he would be leaving the party with 15,000 members on Monday 3rd September, 2018.

The politician, who expressed his regret over “abandoning the work we started,” stated that he had to leave the PDP since, according to him, the party is full of leaders that cannot lead the party to victory.

“They wanted to know why I am leaving the party. I told them I could not stay in the PDP with Chief Olabode George. There are about 8.5 Million registered voters in Lagos State. They gave the power of the party to Chief Bode George, whose wife is working with the APC as the Chairman of the National Drug Law Enforcement Agency (NDLEA).

“The supporters of Chief Bode George tried to disrupt our meeting in Oregun area of the state and they have committed all sorts of atrocities, yet the national body kept looking at him saying that he is an elder,” he said.

Salvador accused Bode George of cooking up story against him over the death of Aborishade, saying that he wanted to destroy the name he has been protecting for years.

Salvador said further that while he is an indigene of Lagos State, Bode George is from Ifo area of Ogun State and that it is his mother that is from Lagos State.

The party Chairman stated that he had to go to where the interest of his people would be protected and that they would not regret going to the APC with him, where he said they would be given jobs and better life.

“Not less than 15,000 members of the PDP are moving with me. We will be announcing our defection officially in Agege Stadium on Monday September 3 and you will see the crowd that would be at the event.

“I spend a lot of money on the members of the party regularly and they are ready to go with me. They cannot leave me alone and they are the ones asking me to go. They used to visit me in Ikoyi Prison everyday. I thank God that the Nigerian Police did their work and I was set free by the court.

“I did not shoot or attack anybody, where Aborishade was killed. They were only trying to implicate me. Bode George is the problem of the PDP. I handed over to the Deputy Chairman of the PDP over one month ago and I informed the leaders of the party through a letter,” he said.

Some leaders of the party from Ifako Ijaiye, Prince Tunde Edward, Otunba Olufemi Sosanya, an aspirant to the Federal House of Representatives and Mr. Momoh Lawal from Shomolu area of the state had revealed they were ready to leave the PDP with their state chairman.

Hon. Moshood Salvador had last week blamed Chief Bode George for his travails over the murder of the Chairman of the Party in Apapa Local Government, Mr. Adeniyi Aborishade in July.

Addressing a teeming members of the party in Maryland area of the state on Thursday, Salvador alleged that Bode George and his supporters cooked up the story that he was behind the killing of the party chieftain.

Salvador told the members that the party had organised local government visitations since the assemblies the party was holding in Oregun area of the state could no longer contain the members of the party.

“The security was tight in the first two local governments we visited, but trouble started when we got to Eti-Osa Local Government. The party chairman there threw the table away and crisis started.

“I was rushed into my car and we later heard that Aborishade was killed. I had left the premises before the killing.

“They cooked up the story that I was behind the killing. However, everything was recorded by video cameras there.

“The Police, the Department of State Security (DSS) and the military did their investigations. They put all the evidences together and stopped my prosecution in the court,” he said.

The politician revealed that he received a call from the State Criminal Investigation Department (CID) in Panti over the matter and that he was asked to come with his witnesses, but that he was arrested and arraigned alongside the witnesses before they were all remanded in Ikoyi Prison.

Thank You Speaker Obasa, We Got The Job – Moses Ayobami