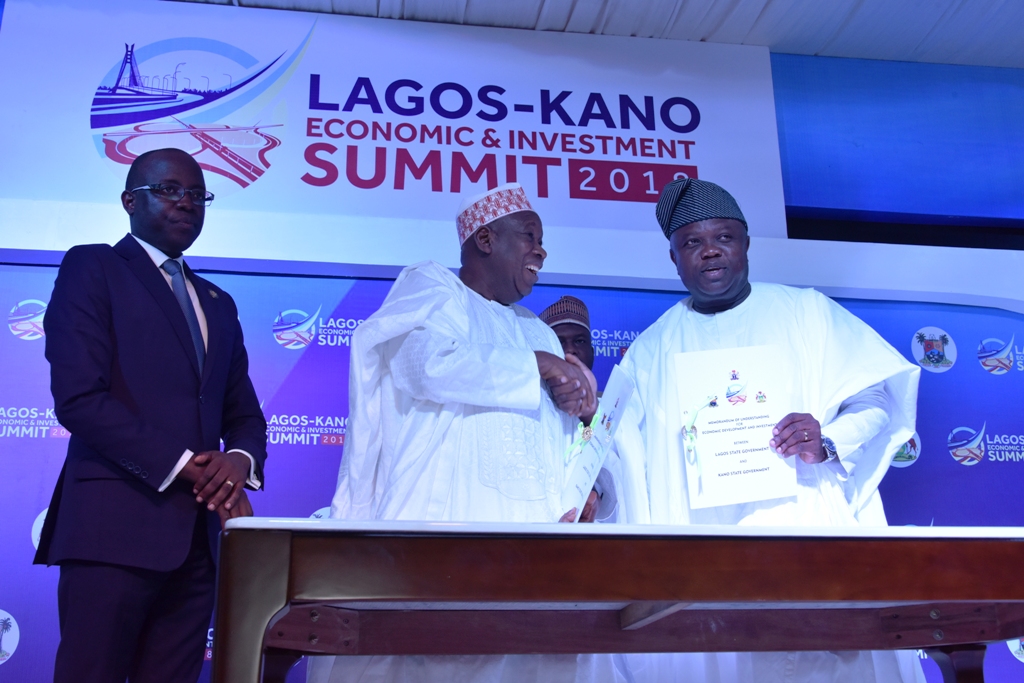 The Lagos and Kano State Governments on Thursday signed a Memorandum of Understanding (MoU) for economic partnership and to jointly explore investment opportunities aimed at creating jobs and facilitating growth and development.

The MoU, which was signed by Governors Akinwunmi Ambode and Abdullahi Umar Ganduje of Lagos and Kano States respectively, at the closing ceremony of the inaugural Lagos-Kano Economic and Investment Summit held at the Jubilee Chalets, Epe, seeks to create a common platform for exploring, expanding and developing areas of economic development and Investment.

According to the MoU, the two States agreed to expand the current level of economic and investment cooperation between them especially in key areas of Governance, Security, Internally Generated Revenue (IGR), Agricultural Value Chain, Tourism, Education, Information and Communication Technology (ICT) and Skills Development.

Other areas include Commerce with specific focus on ease of doing business and Infrastructure in Power, Transportation and Urban Waste Management.

The objectives of the MoU, among others, are to establish a formal and flexible framework between the two States to expand trade and investment cooperation, foster scientific and technological collaboration for business development in emerging key sectors, strengthen communication, enhance trust, boost economic development and create jobs.

Under the agreement, the two States have also set up a Technical Working Group to oversee the implementation of the objectives of the MoU.

In her closing remarks, Lagos State Deputy Governor, Dr Idiat Adebule, said the signing of the MoU by Governor Ambode and Governor Ganduje was a clear testament of the commitment of both States to collaborate in the overall best interest of the people.

She said the two Governors, by the development, “are telling the entire world that collaboration, cooperation, partnership can always work to bring about economic sufficiency in our States and off course the entire nation.”

While describing the summit as historic and successful, Adebule said the programme witnessed presentations from experts, erudite minds, scholars from both public and organised private sector with numerous positions expressed and outlined .

She said: “In this process, our minds have been availed with torrents of ideas, information, statistics, interpretation and above all vision and collaboration leading to economic sufficiency.

“I am convinced that the most valuable outcome of this engagement is the fact that we have Governors who have vision and have the opportunity of sharing this vision. Today, we are not just sharing the vision but providing an enabling environment for this vision to be actualized.