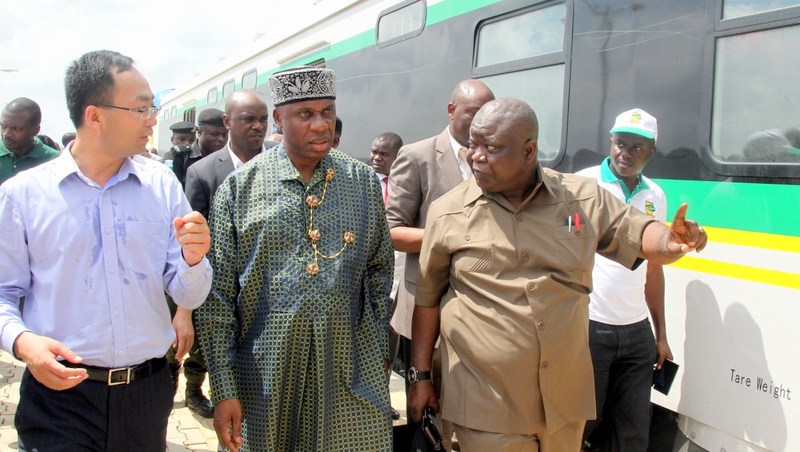 The Minister of Transportation, Rotimi Amaechi, on Friday, ordered stoppage of work at Omi-Adio Railway Station under construction on Lagos-Ibadan standard guage rail line over alleged compromise of standards by the contractor.

Mr Amaechi gave the directive when he got to the station during his monthly routine inspection tour of the ongoing project which he commenced from Lagos in the company of others.

According to him, the observation of non-usage of stone for flooring at the station is one of the benefits of continuous inspection the project.

“One of the benefits of this inspection is what is happening here now. Now, the contractor has been seen to be doing very poor quality job in this station.

“We say stop and they have to start afresh.

The minister said that he had directed the consultant to ensure that there would be a consulting staff, who is an engineer, in every station to ensure quality.

He said that the consultant must be on the ground in each of the stations always and not on a visiting basis.

On progress in track laying, Mr Amaechi said that the contractor had met the federal government’s target, but must work harder on construction of stations for speedy delivery.

According to him, there is the need to speed up work on stations and deliver it by February which is the government timeline.

He said that the argument of the contractor was to deliver by April 2020, but the government’s argument was that they needed more hands and equipment to complete on time.

Mr Amaechi, who noted that the track laying had reached 156km, expressed worry about the pace of work at Agege axis and the extension to Apapa port.

Mr Amaechi said that the delay in completing the 10 minor and major railway stations along the rail line was becoming more embarrassing, especially in December.

He said that his next inspection in January would start from Ebute-Metta to Apapa to see the level of work there.

“No matter how fast we are to Ibadan, if we don’t link Ebute-Metta to the sea port, then it is useless. We really have to decongest the sea port,” Mr Amaechi said..

On Ibadan-Kano standard gauge rail line, the minister said that he was sure that the loan for the project would be signed between January and February 2020.

On the limited number of coaches for the free ride from Iju in Lagos and Moniya in Ibadan flagged of on November 29 and commenced on December 2, Mr Amaechi urged the people to manage the two coaches till January.

“By January we will increase the number of coaches to about 12 to 13 to carry more passengers.”

The NAN reports that the track laying has moved from Iju Station to around Agege and that work was still ongoing in Lagos axis and in Ibadan axis.

It has reached 156 kilometres.

Ekiti govt speaks on alleged herdsmen “take over” of community