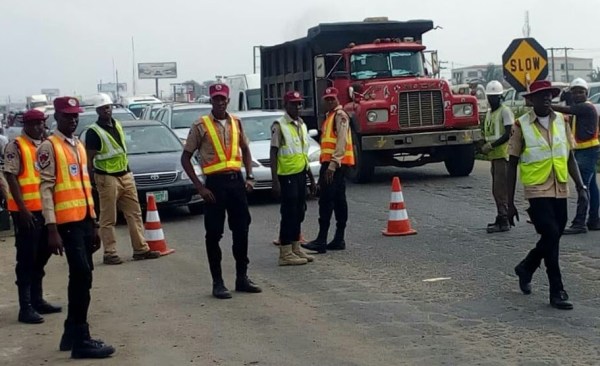 The Federal Government on Sunday opened the Kara Bridge section of the Lagos-Ibadan Expressway to traffic, after completing repair works on a 600-metre stretch, the News Agency of Nigeria (NAN) reports.

NAN reports that the section between Kara Bridge and Isheri Junction inbound Lagos was partially closed on September 2 for reconstruction, resulting in traffic diversion.

When a NAN correspondent visited the site, traffic regulatory agencies, law enforcement agencies and officials of Federal Ministry of Works, Power and Housing were supervising removal of barricades by construction workers.

The FRSC in a slow motorcade took off from the Kara end of the bridge at exactly 10:30 a.m. leading the vehicles on the Lagos-bound carriageway to merge onto the Lagos traffic at the Isheri intersection on the highway.

An FRSC Assistant Corps Commander, Taofik Iyanda, expressed satisfaction at the road repair and thanked the federal government and its agencies that carried out the repair.

Mr Iyanda appealed to road users to exercise caution while driving on the highway.

“Motorists should not see the road as a racecourse. They should exercise patience on the little segment that has been completed and opened for use.

“They should not exceed the specified speed limit.

“The road is still under construction and a lot of things will have to be put in place, so they have to be very careful and exercise patience anytime they are plying the road,’’ he advised.

He told journalists that the collaboration of traffic management agencies and law enforcement agencies helped to minimise road accidents and deaths during the repair period.

Some motorists and road users, who spoke to NAN, expressed satisfaction and appealed to the government to complete the construction to ease traffic on the highway.

The Federal Controller of Works in Lagos, Adedamola Kuti, had in an interview with NAN appealed to road users to observe speed limits to avert crashes.

Mr Kuti, while inspecting the Lagos-Ibadan Expressway on Saturday evening, told NAN that the site cleaning was being completed to prepare for the opening of the road to traffic.

“We have already completed the work up to the asphalt level on this inbound Lagos lane.

“We have completed this lane of 600 metres. We were slowed down by that huge October rain.

“We will not be able to complete the outbound Lagos side; so, rather than start work there, we decided to open both lanes for use so that it will ease traffic during Christmas, ’’ he told NAN.

Mr Kuti added that repairs on the Ibadan-bound carriageway would continue in January.

On Apongbon Bridge on Lagos Island, the controller said that it had been completed and ready to be opened to traffic ahead of Christmas.

He said that ongoing repair on the outer lane was completed and would be opened to traffic within a few days.

“We just completed repairs, it is concrete, we are going to cast some cubes or crush the cubes.

“Once we crush the cubes and it gives us a good result, next week, we will open this completed second section to traffic.

“Crushing the cubes is a method used to determine the strength of the road,“ he said.