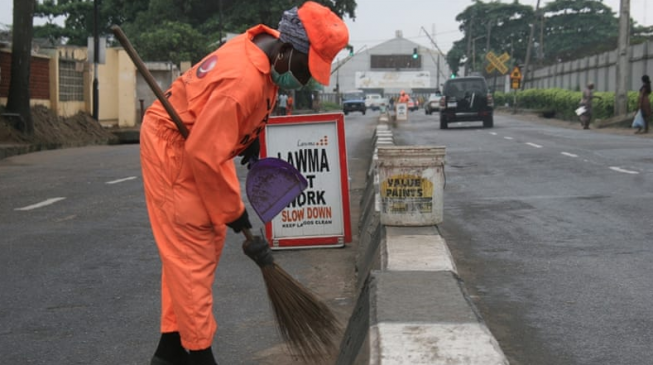 The Lagos State House of Assembly has ordered the 20 Local Governments and 37 Local Council Development Areas (LCDAs) in the state to call on the Private Sector Partnership (PSP) operators in their areas to go back to refuse packing job with immediate effect.

Speaker of the House, Rt. Hon. Mudashiru Obasa, who gave this directive on Thursday on behalf of the lawmakers during plenary also ordered the Clerk of the House, Mr. Azeez Sanni to invite the Commissioner for the Environment, Hon. Babatunde Durosinmi-Etti to appear before the House on the matter next week.

This followed an Urgent Matter of Public Importance raised by Hon. Gbolahan Yishawu (Eti-Osa Constitueny 1l on heaps of refuse scattered all over the state.

Speaker Mudahsiru Obasa  emphasised that the Lagos State Government does not know about Visionscape.

Obasa stated that there are three arms of government including legislative, executive and judiciary, and that the state government ought to have consulted the House on Visionscape before they started operation.

“We insist that we don’t know anything about Visionscape because we were not consulted before they started work.

“We once wrote the Commissioner for Finance, Hon. Akinyemi Ashade not to pay Visionscape again and he would return any money he paid to them after our instruction to the coffers of the state government. We will go to that, when the time comes, but we have to do the needful now.

“We are calling on the 20 local governments and 37 LCDAs in the state to have meetings with the PSP operators to go back to work and they should start paying them and make the residents to start paying the operators. We have to avoid epidemics and be proactive,” he said.

The Speaker also warned those stopping people from dumping refuse at the dumpsites to desist from doing so, adding that he saw a lot of refuse trucks in a bad state and that some of them have been abandoned.

He insisted that the House ought to have approved the new refuse disposal policy of the state governnent before Visionscape started work.

Hon. Gbolahan Yishawu had said that there were several heaps of refuse on Lagos roads, adding that they were not like before “because some PSP are now working and the state government has bought some trucks.”

He said: “Some refuse are taken to Epe and Ikorodu but it is a bit far now as 300 instead of 800 trucks now dispose refuse.

“We used to dump the refusr in Olusosun, but the place was gutted by fire. We can give the place to private companies.

“It is not all the PSP operators that are working.May be we can recall the PSP Operators and reopen Olusosun and the land fill sites should be operated properly.”

The Majority Leader of the House, Hon. Sanai Agunbiade from Ikorodu Constituency 1 revealed that heaps of refuse are worse in his area, and that for the state to have good sanitation,  a law on environmental sanitation was passed in Lagos State, but that it seemed it was not properly done after that.

“The refuse on the road and on the streets are hazardous to the people. Flies from the refuse mix with the food people are eating.

“One day, Olusosun would not be able to accommodate refuse any longer. It would be better if we can change our policy on refuse disposal.

Also speaking, Hon. Bisi Yusuff from Alimosho Constituency 1 revealed that eight people died in Igando, where they dump refuse in his area.

Yusuff stressed that Visionscape does not know the job, and that they did not even allow PSP operators to help the people.

“There are big rats on the roads now and they could even make a vehicle to stumble.

“We should look at it critically. They are not picking any refuse in the state. It is an important matter that should be handled urgently,” he said.

In his comment, Hon. Abiodun Tobun from Epe Constitueny 1 stated that Lagos State is dirty and that only God would help the state.

He stated that Epe is not benefitting from the system and that their water has been contaminated and that all their roads are now bad.

“There is no industrial estate in Epe, but they have in other places. “They cannot bring refuse dump to Epe, they can relocate it if that is what we are benefiting. We want better things in Epe such as industries and other things,” he said.

Hon. Noheem Adams from Eti Osa Constituency 1 said that there are refuse in many places in his area.

He stated that in the days of PSP, people knew when they would pack their refuse outside. We should invite both the commissioner and LAWMA officials as well as the local government. We should be able to do our best because we need the people’s vote now.