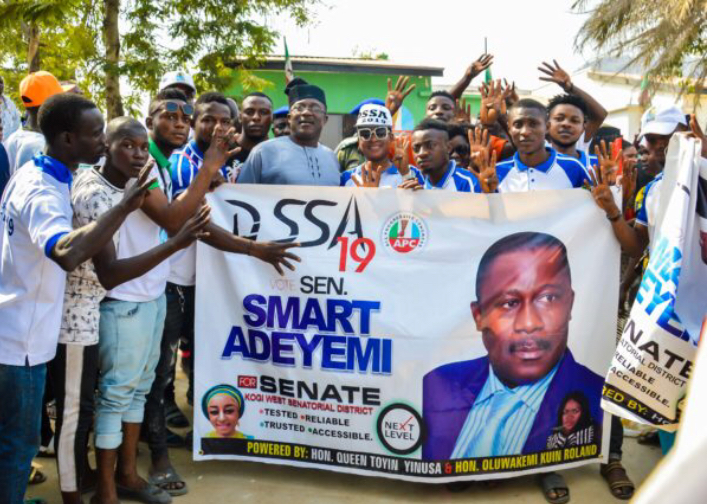 The All Progressives Congress candidate for Kogi West Senatorial District in the February elections, Senator Smart Adeyemi has inaugurated his campaign council at the secretariat of the party in Lokoja Local Government.

The event on Tuesday was attended by hundreds of supporters, including members of the community and support groups.

Adeyemi, a two term senator, had a brief interaction with other candidates contesting on the platform of the All Progressive Congress.

He is hoping to be elected to replace the present holder of the seat Senator Dino Melaye, now of the PDP.

“Don’t forget to remind our people how we represented them with honor and dignity, they can not be represented nonchalantly”, he told the meeting.

“I’m elated by the love and support continuously shown by my people. Together we shall take Kogi West higher”, he said.

At the palace of the Maigeri, he said, “You will recall how we brought in 22 Ambulances, 550 beds and mattresses, the construction of market stalls in four local government areas, construction of cottage hospitals, bursary awards for students, and the purchase of hundreds of vehicles for constituents, including traditional rulers across the seven Local Government Areas”

“With over 97% attendance with dignity at all sittings, apart from impacting positively in the lives of the constituents in the area of empowerment and infrastructural facilities, we tried to emancipate our people even spiritually by sponsoring hundreds to Mecca and Jerusalem”

The traditional ruler advised the Senator to be a voice for the people of Kogi West.

The monarch also recalled the impactful projects Smart accomplished in the past for the people of Kogi West.

The monarch said he believed Senator Smart will do more after his election.

The senator was accompanied by the Director General of his campaign organisation, HAdoga Ibrahim, the APC Chairman of Kogi West, Ropo Asala and the APC House of Representatives candidate Alhaji Isah Wambai.

He will continue his campaign on Wednesday at Lokoja Local Government.