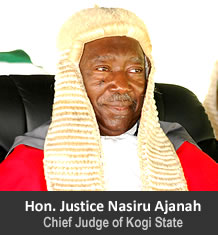 The Chief Judge of Kogi State, Hon. Justice Nasiru Ajanah, CON, has approached the High Court of Justice, Koton-karfe division, to nullify and set aside the purported resolution passed by the Kogi State House of Assembly at its sitting on 2nd April, 2019 recommending him to the governor of the state, Alhaji Yahaya Bello, for removal from office for alleged misconduct.

In the motion filed at the registry of the court on 5th April, 2019 on behalf of the Chief Judge and the Chief Registrar of the High Court, Mr. Yahaya Adamu, by their counsel, Chief Adegboyega Awomolo, SAN, the applicants predicate their application on the ground that the purported resolution was made in violation of a subsisting order of the court and during the pendency of the action before the court.

In the affidavit deposed to by the Chief Registrar to support the motion, he said he knows that at the resumed sitting of the court on 2nd February, 2019, counsel to the applicants, Muhammad Abeni, SAN, had “pointedly informed the court of the ceaseless and clandestine moves by the defendants, particularly the 1st – 3rd defendants (Kogi State House of Assembly and its principal officers), to flout the interim orders of this court”.

He also added that contrary to the assurances given to the court by the defendants’ counsel and the subsequent reminder sent by his counsel to remind the House of Assembly of the pendency of the suit before the court when the applicants got the wind of the House of Assembly’s move to sit over the matter on 2nd April, 2019, the defendants “utterly disregarded” the reminder. He said instead, the House went ahead, at its sitting on the said date, “to consider and adopt, in toto, a report of its Public Accounts Committee” which recommended to the governor to “remove the Chief Judge of the High Court of Kogi State for gross misconduct”. He said the committee recommends that in the alternative, “the Chief Judge of Kogi State steps aside pending his appearance before the House Committee on Public Accounts to defend the indictment against him in the Auditor-General’s report” while “the Chief Registrar should be referred to the Kogi State Judicial Service Commission for disciplinary actions for misconduct.”

The Chief Registrar concluded that he honestly believed that the House of Assembly “decided to act on the purported report by its Public Accounts Committee (and not the anticipated report from its earlier Adhoc Committee) in order to circumvent or side-track the orders of this honorable court.”

Defendants in the matter are the Kogi State House of Assembly, its Speaker, the Chairman, House Adhoc Committee on the “impasse” between the judiciary and the executive; the governor and the Attorney-General and Commissioner for Justice of Kogi State.

Despite my African Union passport, I still need a visa to enter Angola – Dangote

I Have No Regret Over Senatorial Poll Loss – Ajimobi