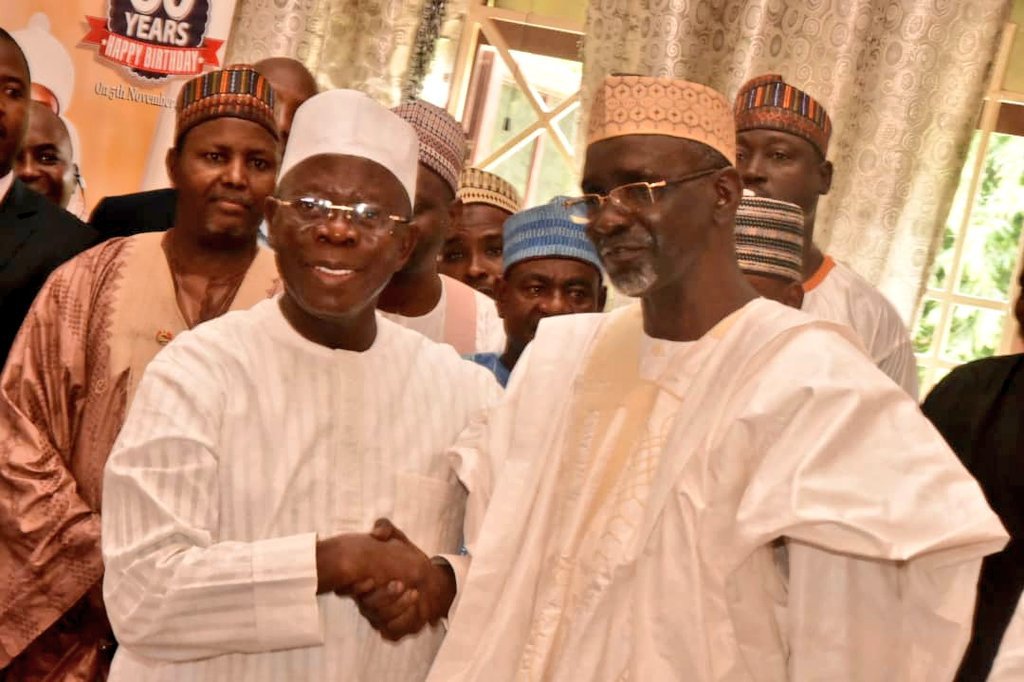 The back and forth of former Kano State governor, Ibrahim Shekarau, over his political future came to an end Friday as he hosted All Progressives Congress (APC) National Chairman, Adams Oshiomhole, and Kano Governor Abdullahi Ganduje, to put finishing touches to his official defection from the Peoples Democratic Party (PDP) to the APC.

Mr Shekarau received the two men at his residence at Mundubawa Avenue, Kano.

He is expected to publicly declare his return to the ruling party on Saturday in Kano.

Mr Shekarau’s spokesperson, Ya’u Sule, had earlier on Tuesday disclosed in an interview with the BBC Hausa that the former governor was returning to the party he left for the PDP just before the 2015 general elections.

But the following day, he refuted the claim of his spokesperson, saying he was still consulting with his supporters.

However, on Friday, he ended the controversy by appearing with Messrs Oshiomhole and Ganduje in Kano to announce his defection.

Speaking at the event, Mr Oshiomhole described the return of Mr Shekarau to the APC as a reunion of progressive politicians.

“In any union, it is real progressives that reunite when conservatives run away. In my estimation, you are above many many when it comes to progressive ideas in this country,” the APC chairman said.

“You didn’t participate in the formation of APC for yourself alone, you did participate for the development of the country of which we share similar thinking along that line.

“I am extremely happy to be here, visiting a long time comrade who also believes in the Nigeria project. I know your views on social policies and economic approach for the development of the country,” Mr Oshiomhole added.

Mr Ganduje said, “We are here to reunite ourselves for the betterment of our nation, to reunite relationship between Shekarau and APC. This relationship has come to stay.”

Mr Ganduje said he and Mr Shekarau have many things in common.

“We are all bureaucrats. We have always been friends. I am the happiest person for Shekarau to be in the same political party with me. We all believe in the development of the country,” the governor said.

He said all other things between his government and the former governor would be sorted out.

“You are one of the founding members of this party, the APC. But we know you left the party because of some issues that were caused by some hypocritical minds around the former governor (Rabiu) Kwankwaso.”

On his part, Mr Shekarau thanked the leadership of APC for finding him worthy of such special treatment.

“I sincerely thank you Mr Chairman and the governor of Kano State, Dr Abdullahi Umar Ganduje, for this friendly and political visit. I assure you that we will remain as one,” he stated.

Describing Mr Oshiomhole as a long-standing friend and comrade, Mr Shekarau said, “It is history that is repeating itself here. I have a singular honour of being the chief midwife of the APC.”

Claiming a long-standing relationship with Mr Ganduje, he said “Since when I left, I have good relationship with Governor Ganduje and his people. Due to my training and tradition, we don’t look down on people with disdain.”

He assured that, his reunion with the APC would bring more meaningful development to the state and Nigeria at large.

“We share many things in common, like sincerity of purpose and morality in political activities,” he said.

Mr Shekarau was a founding member of the APC but left following the arrival of his successor, Rabiu Kwankwaso, in the party from the PDP.

He was then appointed Minister of Education by former President Goodluck Jonathan. He is returning to the APC as a fall out of the defection of Mr Kwankwaso in July back to the PDP.

Mr Shekarau is being prosecuted by the EFCC for allegedly fraud by receiving, alongside two others, N950 million campaign funds in the build up to the 2015 general election.

Mr Shekarau is being prosecuted by the EFCC for alleged fraud by receiving, alongside two others, N950 million campaign funds in the build up to the 2015 general election.