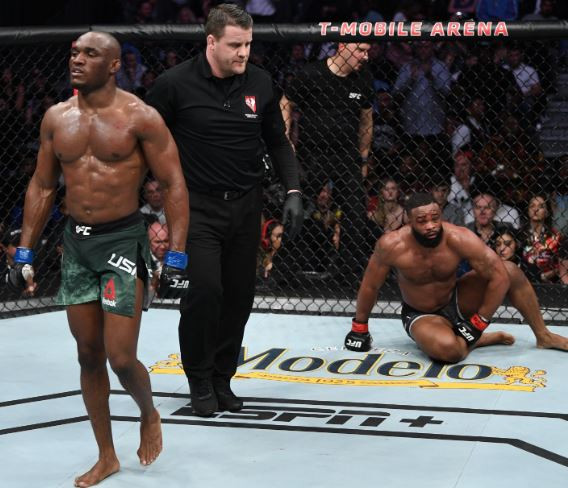 Kamaru Usman has just emerged as the first African-born champion in UFC history.

The Nigeria born fighter relentlessly punished Tyron Woodley for five rounds to become the new welterweight division champion. Usman controlled the fight from start to finish and won via unanimous decision, capturing scores of 50-44, 50-44, and 50-45.

Usman now owns a 14-fight win streak and a career record of 14-1. He’s yet to lose in the UFC. Woodley tasted defeat for the first time since a unanimous decision loss to Rory MacDonald in 2014. Usman had the long-reigning champion backpedaling from the outset of the fight and cracked Woodley with an elbow early in the second, drawing blood from the champion.

Usman connected on 336 strikes versus 60 and dropped the elite wrestler with two takedowns. Woodley has since offered his congratulations to the new champion and expressed a desire for a rematch.

Pastor Alph Lukau who ‘resurrected’ a man in viral video grants first interview, says ‘everything we do is consistent with scriptures’