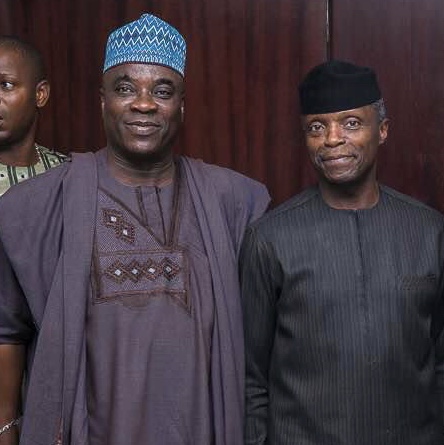 Acclaimed Fuji music king, Wasiu Ayinde Marshal, who is well known as  K1 De Ultimate has proven yet again that he is not just a performer who is interested in music and the business of entertainment alone but an artiste who has the interest of the general public at heart.
K1 who paid a courtesy visit recently to the Vice President Professor Yemi Osinbajo in Abuja has explained the reason behind his visit.
In a chat recently, the artiste explained that he went to see the number two citizen of the country to echo the feelings of the people to him on the state of nation. K1, who is aware of the effort of the President Mohammadu Buhari led administration in making lives of the citizen better in all ways, relayed the feelings of the people on where they needed improvement in their various state of life.
While extolling the virtues of the Vice President, K1 stated that one of the  shining qualities of the Vice President is his listening ears; “no matter whom you are, Professor Yemi Osinbajo is ready to listen and make amendment where necessary. That to me is a rare quality of a superb leader” he averred.
Aside the general issue, K1 also seized that opportunity to talk  about his primary constituency which is entertainment. He further discussed on how the government of the day can better their lot in the business of entertainment which he got a positive nod from the Vice President.
K1’s visit to the Vice President coincided with his much talked about dazzling show at the Abuja Transcorp Hilton Hotel, dubbed ‘K1 Live In Concert’
Related Topics:
Up Next

MMM’s Sergei Mavrodi, the notorious scammer that many Nigerians will not forget in a hurry