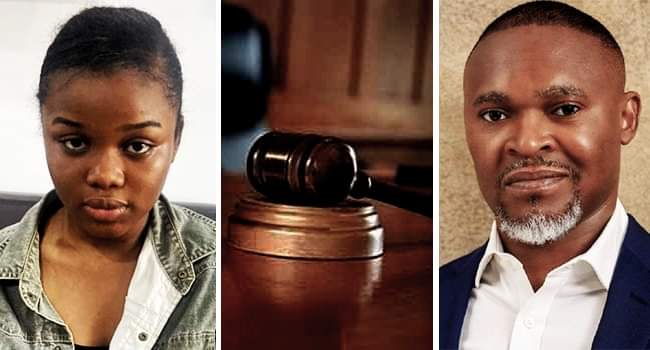 A Lagos High Court sitting at the Tafawa Balewa Square on Tuesday dismissed the objection raised by the counsel to Chidinma Ojukwu to cross-examine an employee of Access Bank over the late Mr Usifo Ataga’s bank statements tendered as exhibits.
Justice Yetunde Adesanya, however, admitted the bank statements as exhibits.
Ojukwu is standing trial for the alleged murder of Ataga, the Chief Executive Officer (CEO) of Super TV.
She is charged with murder, stealing and forgery alongside her sister, Chioma Egbuchu, and one Adedapo Quadri.
On Tuesday, the prosecution counsel, Mrs A. O. Oluwafemi, told the court that the prosecution had a representative from Access Bank who was in court on the basis of the subpoena to tender the account document of the deceased.
She then called the representative of the bank, Toafeek Lawal, to the witness box to tender the statement and the certificate of identification.
After tendering the statement, the counsel to the first defendant, Onwuka Egwu, raised an objection to cross-examine the officer from Access Bank over the document he tendered.
According to him, Lawal is the account officer of the deceased as can be seen from the subpoena and certification attached to the account.
He, therefore, said that the officer from the bank was in a position to give evidence in respect of the account.
But the counsel to the second defendant, Mr Babatunde Busari, and the one to the third defendant, Mr A. O. Ogunsanya, did not raise any objection to the tendering of the account statements.
Justice Adesanya, in a short ruling, said that Section 218 of the Evidence Act (EA) 2011 provides that a person whether a party or not in a case, may be summoned to produce a document without being summoned to give evidence.
She also said that Section 219 of the EA provided that a person summoned to produce a document does not become a witness by the mere fact that he produced it and cannot be cross-examined unless and until he was called as a witness.
“This officer from Access Bank has not been sworn on oath, therefore, he cannot be cross-examined”, the judge held, while dismissing the first defendant’s application.
Similarly, an officer from Guaranty Trust Bank, Ademola Ayodeji, also tendered the bank statements of the late Ataga before the court.
Consequently, Justice Adesanya admitted all the documents in court as exhibits.
Our correspondent reports that on April 25, the prosecution had asked the court for a short adjournment to enable the prosecution put its house in order concerning the bank statements of the deceased.
The three defendants were arraigned on Oct.12, 2021, on a nine-count charge preferred against them by the Lagos State Government (LASG).
Ojukwu and Quadri are facing the first to eight counts bordering on conspiracy, murder, stabbing, forgery, making of bank statements and stealing.
The third defendant, Egbuchu, is facing the ninth count of stealing of an iPhone 7 belonging to the late Ataga.
Ojukwu and Quadri are alleged to have conspired and murdered Ataga on June 15, 2021, by stabbing him several times with a knife on the neck and chest.
The alleged murder took place at No.19, Adewale Oshin St., Lekki Phase 1, Lagos State.
The duo were also accused of committing forgery by procuring and making bank account statements purported to have been made by the deceased.
The case was adjourned until April 28 for continuation of trial.

EFCC witness: How fake army general posed as Obasanjo’s son to defraud me of over N200m