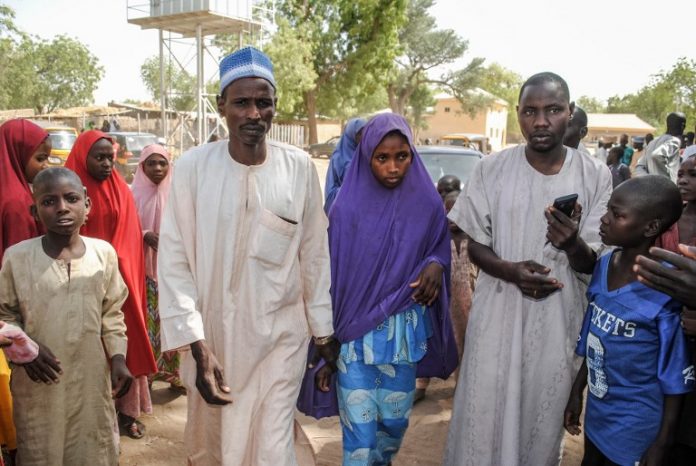 The 107 returned student of Government Girls Science and Technical College Dapchi have reunited with their families on Sunday.

The reunion, which took place today at the school premises came few days after President Muhammadu Buhari met the released girls in Abuja on Thursday.

It was gathered that some of the parents went to the school as early as 8:00pm and waited for the children arrival
In his brief massage to the parents, Senator Bukar Abba Ibrahim, who was part of federal government team congratulated the parents and advised them not to be deterred by the unfortunate incident.

“What happened should not deterred you from sending your children back to school. As Muslims, we should consider it as an act of God, and with prayers, God has returned them back to us safely”, he said.

The state governor, Alhaji Ibrahim Gaidam, who was represented by the commissioner of information, Mala Musti, commended President Muhammadu Buhari for keeping to his words of reuniting the children to their parents.

It was a joyful mode in the school and Dapchi town, as residents, parents and other wepull ?lllll wishers stand on the streets and the school gate to have a glimpse of the girls, for the first time after being released from captivity.

One of the parents, Mai-sale Gadina, described the date of the schoolgirls abduction as painful and joyful for the day he reunited with his two daughters.

“The sad days had been washed away today. But, we want government to know that adequate security measures must be taken before we returned our children to school”, he said.