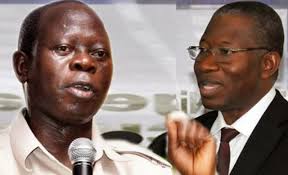 Vanguard reports that the governor made the revelation speaking at a meeting with leaders of the All Progressives Congress (APC) across the three senatorial districts of Edo state on Thursday, January 15.

Oshiomhole recalled that this time last year there was such tension in Nigeria that many prophets were almost unanimous that the country would not survive 2015.

“Around this time last year, in January, a few weeks to the election, many were saying quite recklessly on radio and television that we were finished.

“The former president, Goodluck Jonathan told our national chairman, Chief John Odigie Oyegun, to inform me that after the election, he will put me, Adams, the son of Oshiomhole in a hole and I told Chief Oyegun to inform him to dig that hole very deep because although I am short, in the course of pushing me into the hole, nobody knows who will get there first.

“Since he is taller than me, he needs to dig the hole deep enough so that either of us can get in. In the end, he is inside the hole and I am busy putting dust into that hole.

“In this hall, around this time last year, we held a meeting to share information about what was going on in various local governments and the specific challenges in each of those local government in order to fashion out appropriate response.

“Some of the statements that we shared in those meetings included threats that by June, Comrade Adams Oshiomhole would have been impeached because PDP would write results whether we liked it or not. They would overrun the House of Assembly and once the House is proclaimed in June, before the end of June, Comrade would be banished to his house in the village and from there to prison,” he said.

Oshiomhole noted that those who made threats are now writing letters to explain how they shared money meant for defence. He also stressed that every evil weapon they fashioned against him did not prosper.

Speaking about the ruling APC, the governor noted that the party has risen from ground zero to become the leading party in the country.

“When we came in about 7 years ago, my party had no control even of one ward. We had no control of one local government, but today, we control wards, local, state and by the special grace of God, federal. Things have changed. The one who tamed a lion with bare hands, now with automatic weapons, no antelope can dare us in our own forest,” he added.

A few week ago, Oshiomhole predicted that the year 2016 would be a tough one for Nigerians, considering the crisis currently rocking the economy.

The governor warned Nigerians that the level of strike activities in the economy would be very high and the level of unemployment, which is already unacceptably high, could get even higher.

Court Orders Metuh To Be Remanded In Prison Custody