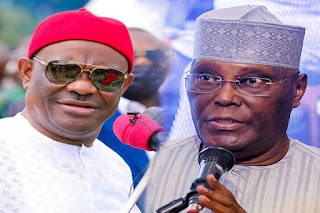 Details have emerged on the resolutions taken at a meeting of a group of leaders of the Peoples Democratic Party (PDP) on the crisis in the main opposition party.

The meeting was hosted on Sunday at the Rivers State Governor’s lodge in Abuja by Governor Nyesom Wike.

Most of those in attendance had backed the governor ahead of the PDP presidential primary, which he lost to a former vice president, Atiku Abubakar.

Speaking with journalists after the meeting on Sunday, a member of the party’s Board of Trustees, Jerry Gana, said the group was meeting for the first time to review the primary, which was held at the party’s national convention in Abuja, and the developments in the party ahead of the kick-off of electioneering.

Mr Gana hinted that the group took some decisions, but he did not disclose them.

“We know that developments will unfold, and when they do, we shall brief Nigerians. We met together for the first time after the primaries of the PDP.

“We have frankly reviewed matters among ourselves. We want to confirm we are solidly together as a group.”

However, multiple insiders have told PREMIUM TIMES that the meeting extensively deliberated on the dispute between Mr Wike and Atiku over the presidential candidate’s choice of Delta State Governor, Ifeanyi Okowa, as his running mate.

The crisis is said to be delaying Atiku’s composition of his campaign organisation.

But according to sources at the Abuja meeting of Sunday, the group insisted that the National Chairman of the party, Iyorchia Ayu, must step down to allow another person from the south of Nigeria to take his place.

The leaders said this would be their precondition for any meeting with Atiku over their roles in his campaigns for the 2023 election.

The group decried the lopsidedness of the leadership of the party in favour of the northern zones. Mr Ayu, an ally of Atiku, is from Benue State in the Northcentral zone, while the presidential candidate is from Adamawa State in the Northeast zone.

The leaders noted that aside from those two, Mr Ayu’s immediate lieutenant in the party’s National Working Committee, Umaru Damagum (Deputy National Chairman, North), the chairman of its Board of Trustees, Walid Jibrin; and the chairman of the PDP Governors Forum, Governor Aminu Tambuwal of Sokoto State, are all from the North,

“How can a party that is systematically one-sided sell itself in the South? one of the sources who spoke with this newspaper said.

The leaders also accused Atiku of sidelining party leaders outside his core supporters in his decision-making. They said they were aware that those in Atiku’s camp have allegedly shared key government positions among themselves, even before next year’s elections.

“How can we work for a presidential candidate who is already sidelining other leaders who are not in his camp and expect that he would change when he becomes president?

The candidate has not demonstrated good faith at all. The election is for Atiku to lose. If he wants to win, he knows what to do. The ball is in his court. We were clear at the meeting that he alone can decide if he wants to win or lose the election,” the source.

The meeting also accused Mr Ayu of dividing rather than unifying the PDP since his emergence as National Chairman.

“The minimum condition for negotiation is that the chairman has to step down. We have resolved not to leave the party. We will stay at the party and fight from within the party.

Also in attendance were former governors Donald Duke of Cross River, Gabriel Suswam of Benue, Olusegun Mimiko of Ondo, Seriake Dickson of Bayelsa, Ibrahim Idris of Kogi, Jonah Jang of Plateau and Hassan Dankwambo of Gombe. A former Ekiti governor, Ayo Fayose, was also said to have been absent for health reasons.

Also at the meeting were a former PDP Deputy National Vice Chairman (North), Suleiman Nazif; and a former Attorney-General and Minister for Justice, Mohammed Adoke.

Others are sitting and former senators Hosea Agboola, Phillip Aduda, Zainab Kure, Garba Lado, Sandy Onoh, Olaka Nwogwu and many members of the House of Representatives.

Also in attendance were Mohammed Sani Abacha, the party’s governorship candidate in Nasarawa , David Ombugadu, and Mike Omeri, a former director-general of the National Orientation Agency.