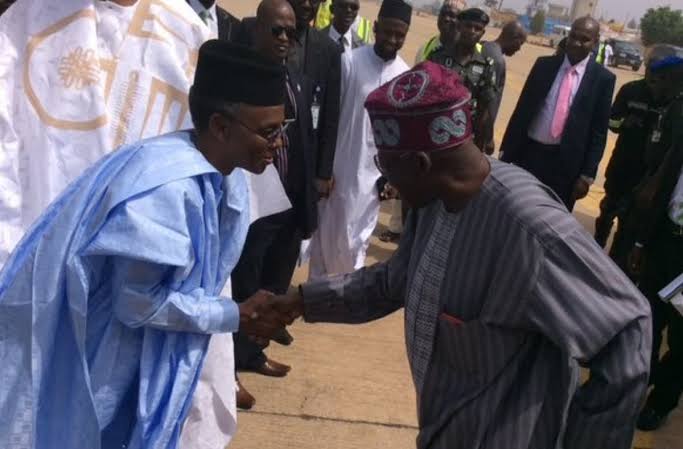 Kaduna State governor, Nasir el-Rufai, on Friday, claimed that some unnamed people asked him to join in a plot to destroy All Progressives Congress (APC) leader, Senator Bola Tinubu.

Governor el-Rufai stated this while he was playing host to 121 members-elect of the House of Representatives who were on a consultation tour of the North West on Friday at the Government House in Kaduna.

The governor was invited to deliver a lecture in Lagos last month on godfatherism, where he said that he had an answer to godfatherism as he had retired four godfathers in Kaduna.

According to him, during the last election only 1 million registered voters came out to vote in Lagos out of the 5 million voters, so he asked why did the remaining voters refused to come out, pointing out, if he is the governor of Lagos he will out on those who did not come out to vote to defeat the godfathers in Lagos apparently referring to Tinubu.

However, el-Rufai said it was “a generic statement”, adding that he had a template that was used to retire some godfathers in Kaduna State.

He said: “That was not an attack on Asiwaju, it was a generic statement, but the whole thing took a media frenzy because to some people, Asiwaju is a meal ticket.

“Let me tell you, because of that, some people started confessing to me that Asiwaju should be dealt with.

“They said Asiwaju wants to finish you, he has been abusing you, we should finish him by finishing his man, Femi Gbajabiamila.”

However, contrary to insinuations in some quarters, el-Rufai had disclosed that Femi Gbajabiamila was President Muhammadu Buhari’s choice for the Speakership position of the 9th House of Representatives.

“I told them that this is not about Asiwaju but President Buhari and I will fight it with the last drop my blood. I told them to change their mind.

“I went to Asiwaju and told him that we will do what we can to make this project a success.”